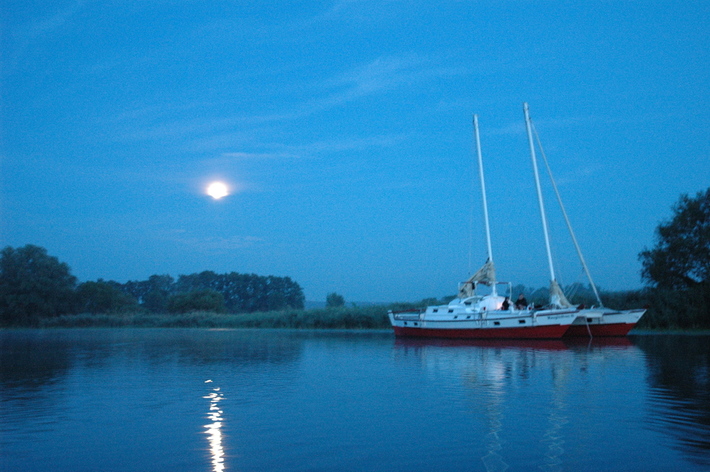 Björn has not received any gifts yet

I am:
A home builder, I own a Wharram

hans boortman said…
Hi Bjorn, I do not have a sketch of my bimini,but as you can tell from the pictures I modified the deck pod to fit the bimini, to get from one side to the other you would have to make the frame wider , and would be difficult to get to the mainsail, a better alternative is to make up an awning from the frame to cover the entry hatch,better yet, do away with the deckpod altogether,and now you have a large area to build a hardtop,check out john shuttleworth designs,shuttle 31 for pictures.
Bjorn, thanks for the compliment,my tiki is for sale,if you know of anyone let me know.Thanks, Hans.

boatsmith said…
Hi Bjorn, So fer I am very pleased with the Dyneema rigging from Collgio Marine. John was very helpful and prompt.The stuff is very easy to splice, lightweight and easy on the hands and sails.I too am planning on changing to an aluminium mast. I don't as of now have any thoughts on a design for a bimini on a Tiki 38. The bimini on our Tiki 30 has worked out very well. The aluminum frame makes for excellent handholds We designed it to be able to add parts onto the perimeter. After using it for a while we can simply make new canvas and be able to attach side curtains. a dodger panel, and a screen/ rain room. This will enhance the livability at anchor. David www.boatsmithfl.com

I have better picktures of my sailcovers on the boat wichs is now in portugal.

On this moment I am in holland. The plan is to go to portugal in 2 weeks.

I will try to send you some when I am there.

The top of the sailcovers is closed by the two overlapping sides and fixed with plastic hooks.

I stitched a meched material in the bottom part.

The covers are good against the sun but there is always a lot of rainwater sitting in the sails comming from te mast.

By the way, where have you seen the picktures of my boat?

I have seen Pictures of my boat on a site from Jaques.     Pilgrim38.fr

There you get a better vieuw on the sailcovers.

We have built the boat in spain, and from there we sailed to the canaries, cape verdes, gambia. Then we crossed to Salvador in brazil. Then we went along the brazillian coast almost to Rio and back up again.

After that we visited Surinam and from there we went into the caribean sea, where e spend 3 jears.

Our plan was to go into the pasific but due to familymatters we went back to Europe.

The boat is now in the rio guadiana, beween portugal and spain.

I sailed the boat from Panama back to portugal on my own.

In Horta I met Jaques on Pilgrim.

Where are you on this moment?

And if You are from Berlin, warum schreiben wir nicht auf deutsch.

Hi  Björn, thank you for the comments on the video's. Its great to hear from a fellow Tiki 38 owner. I did not know about you or you boat. I just scrolled through your amazing photo collection. There are some inspiring shots there and your boat is beautifully maintained. She looks like a really fine example of the 38! I will be back to look at your videos! Thanks for the offer for a beer! I will certainly look you up. You never know! Cheers Stewart