Using a tillerpilot on a Tiki 30

We have set up a tiller pilot on our Tiki 30 which uses an extension rod connected to a universal joint connected to another rod coming off the tiller, close to the rudder, at 90degrees.  We have found it unreliable to use and suspect that the problem is the weight of the tillers being too much for the motor in the tillerpilot; has anyone else experienced this?  We have a windvane so the back up is to connect the tiller pilot to this but I was wondering if anyone had found another way around the problem.

Robert, what manufacturer and model of tiller pilot? I'm sure there are tiller pilots that are strong enough to handle the rudders on a tiki 30.  The mounting will have an effect, of course. You want the tiller pilot to apply pressure at the best point on the chord of the rudder.

If you (Charlie!) don't want to have to adjust the tiller pilot when the wind freshens or goes calm, you will have to obtain a tiller pilot that accepts NMEA input from a GPS or a wind sensor, or both! Life gets complicated rather quickly, here! 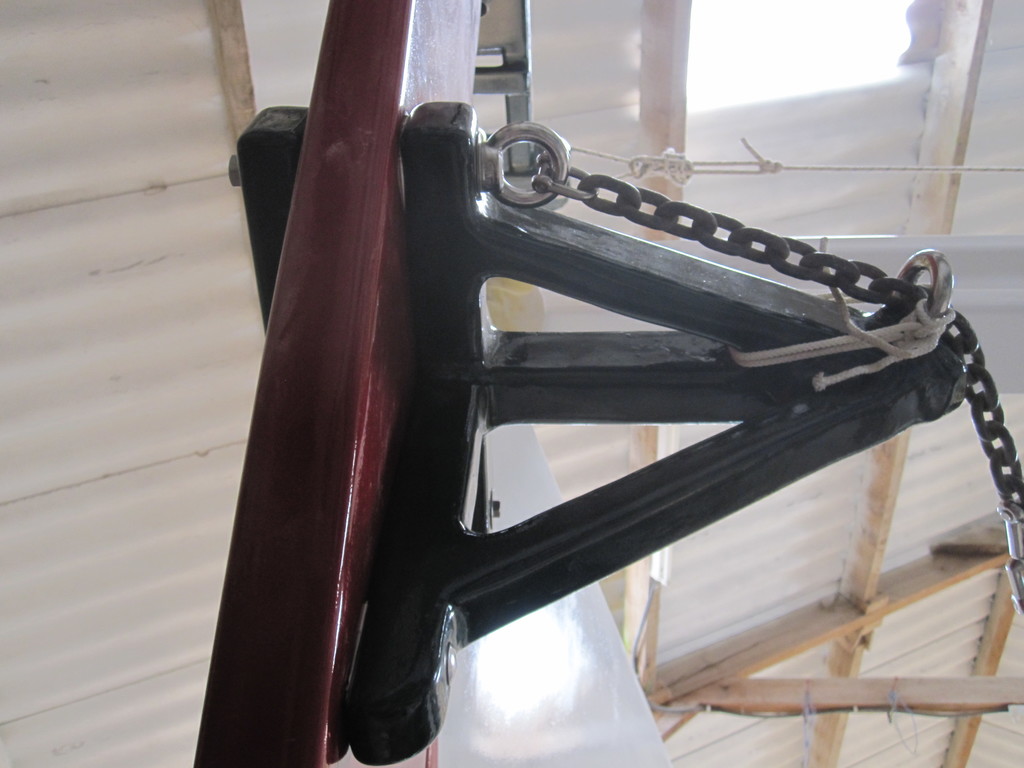 Permalink Reply by boatsmith on October 3, 2011 at 5:34pm
Hi Robert, The rudder load on  the Tiki 30 can be handled up to about 10 knots of boatspeed with a Raymarine ST 1000. Above that speed the rudder load will  be too much for this unit. The ST 2000 is a better choice. One issue the Tiki 30 has is the rudder shaft angle is 25 degrees. This means that 25% of the rudder force is trying to drive the sterns down rather than controlling the direction. As the speed increases the rudder load will increase as well. At displacement speeds this is not much of an issue but as the speed climbs higher the load will increase and once you are blasting along at  14-15 knots the rudder load will pull your arms off after several hours. More rudder designs will have a more vertical rudder shaft angle and a portion of the rudder forward of the rudder shaft to provide some counter balance area that reduces the rudder load. This reduces drag and fingertip control is obtainable even at higher speeds. I discussed this with Hanneke and she told me to slow down and there wouln't be any problems. Thing is, I like to go fast. The skeg hung rudder is very well protected andtis is a good thing. Everything is a balancing act on a sailboat. Hope this helps Rober tand Helen. These are just my thoughts. Peace, David

Permalink Reply by boatsmith on October 3, 2011 at 5:37pm
The tiller pilot steers to a compass course and canges in boat speed and wind direction/velocity will have no relation other than rudder load.

I bought one st 1000 for tikirio and has thought about installing it with extensions, like Robert or install it in the stern 460mm of the rudder shaft (standart position) 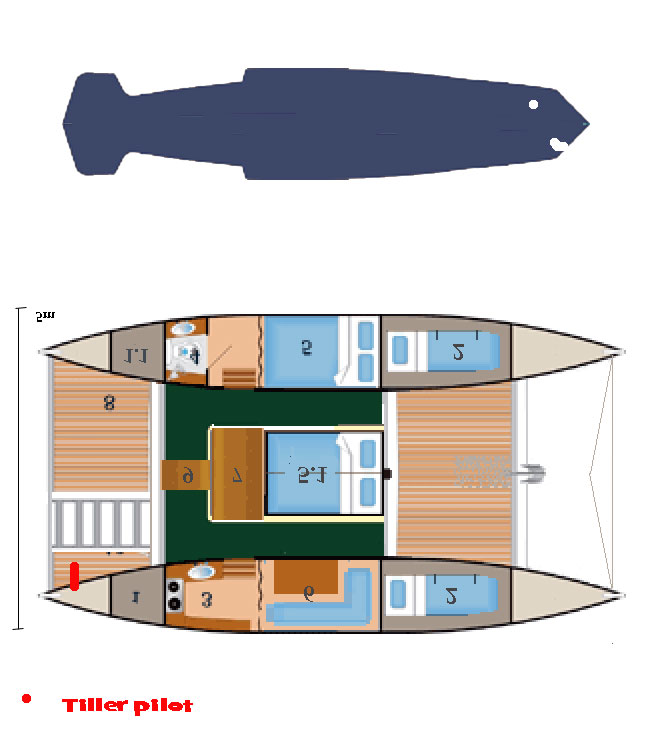 Please Robert post some pics of your tiller pilot instal

Permalink Reply by Robert Sheridan on October 19, 2011 at 2:50pm
Will post some pics when we are operational again and have a good internet connection, Mango has been transiting the canals from Bordeaux to the Med for the past few weeks,

Below is a pictur4e of the prototype.  The rod coming off the tiller was bending so I am going to replace it with stainless steel tubing, otherwise it worked pretty well.  The swivel joint is produced by RWO for tiller extensions.  I need to come up with a better way of connecting the tillerpilot to the push rod, currently it slots inside the tube and a pin is pushed through to hold it but this is a bit cumbersome.  In an emergency the tillerpilot can be lifted out of its socket and rested on the tillerbar. Does the tiller pilot work OK in the fore-aft position, given that the Raymarine instructions say to mount it athwartships?

Permalink Reply by Robert Sheridan on November 6, 2011 at 3:05am
Yes, ineffect the rod coming of the tiller acts as the tiller and we are using an overlong push rod.  The problems are around minimising movement in the linkage and flex on the rods plus the inherent problem of the weight of the tillers and the angle of the rudder attachement to the hull as discussed in the thread above.

That's very useful - thank you. I've been wondering how to do this on my Tiki 21 and will definitely use your system when the budget allows. I had a look around online, and one approach could be to use stainless aftermarket automotive tie-rod arms and universals.

Perhaps leverage is the key.  My Tiki26 came with a Raymarine ST1000, but I am unclear as to how it was set up or how well it performed, so I've been wrestling with how to reinstall it.  From the physical evidence, the best I can figure is that the base of the tiller pilot was mounted on the inboard rail of the port hull about a foot behind the aft beam, and connected with a short "pseudo" tiller that hinged at the aft beam and met the tillerpilot at a right angle. It looks like this was attached to the tiller bar where they intersected.

Looking at your setup, I imagine you could increase the tillerpilot's leverage by lengthening the short rod attached to the rudder head, although this would alter the angle to your base mount and proportionally stress the rod.  Imagine trying to steer with your own hand using that rod, versus at the tiller bar. That would give you a sense of the torque that the tillerpilot has to deal with. Given the "hysteresis" built into the tillerpilot's programming, I would assume there is a sweet spot in the torque needed: too much torque demand (i.e. too short of a lever arm) and it would need to work too hard and potentially understeer, and too little torque demand might cause it to oversteer.

This may not be very helpful, as I don't have the Raymarine specifications at hand, but the goal would be to get as close to them as possible.  Would two rudders mean one would halve the necessary lever arm to arrive at the correct torque at the rudder pivot?  Or would the turning moment of two hulls cancel that out? Seems like a question for a Raymarine engineer, but one that could ultimately be solved with a little math.