Back in October 2013 when Gratitude went into her wintering barn for renovation, the spring seemed too far away and there was plenty of time for all the work. Come March, much progress had been made and a date was fixed with a friend for our sea trials.

I'd bought Gratitude, my first sailing boat, at the end of last year after borrowing her for a few test sails. There was a bit of work to do, but essentially she was sea worthy. As the winter wore on, the paint was stripped away and problems emerged. Nothing serious, but all added to the workload. I built new platforms with a bigger section to take the fuel tank. The mast was rotten, so an alloy tube was procured. Sections of the gunwales were wet or rotten. An old hole was to be repaired. 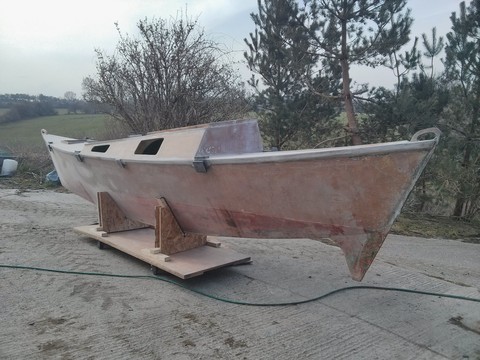 This was two weeks before launch!

About 6 weeks back, I realised time was tight and planned out the remaining work. A task list was generated and spread across the calendar. Each day went by and more tasks were pushed down the line. They stacked up ominously against my deadline. With two weeks to go, I warned my friend that I might not make it. With a week to go, I thought there was a chance, but could he come down early to help with the work? By the Wednesday, the Friday's departure had become Saturday's, Thursday's rigging had become Friday's launch and rig. On Wednesday, I drove the 12 miles back from the boat to Exeter to collect my friend who had arrived from Yorkshire. We grabbed a few things and returned to the boat and applied a coat of paint to the decks. We worked through the evening then drove back to Exeter and began work on the mast head which was to be built from the old mast, inserted into a new 6 meter alloy tube. We epoxied up the mast parts towards 11pm and went to bed. Thursday we painted the decks, beams and platforms. We had the space-heater on flat-out to get the drying times down. Anti-slip went on last. We left the barn at 2am only to return the next morning at 9am. 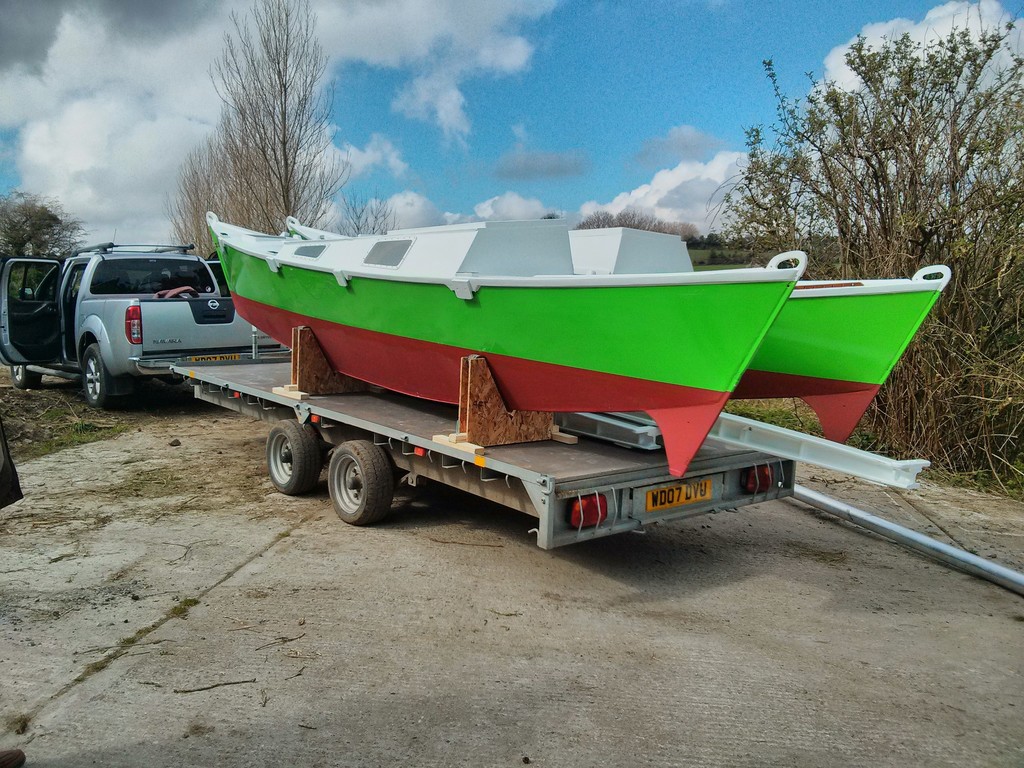 The plan for Friday was to assemble the boat on the Exe estuary from around 10:30am at low tide. By the time we finished assembling the mast, placing the boat name vinyls etc., it was late. We made the estuary around 1:30pm where the tide looked to be a mile off. As you can imagine, we were soon up to our knees in water trying to lash the beams. But when it comes to the crunch, luggage straps will save you every time. Temporary construction complete, the mast on board, and we were away off down the river to the mooring. We had real fun with the brand new dingy which was under inflated and only the ends of the paddles to make way. But we made it; we were on the water. 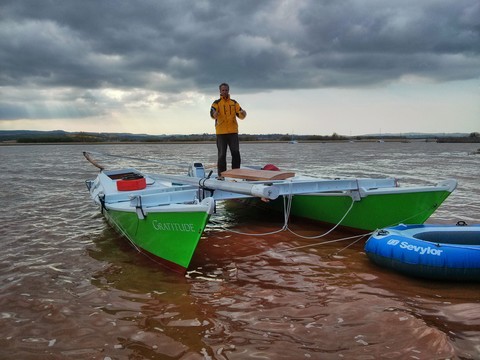 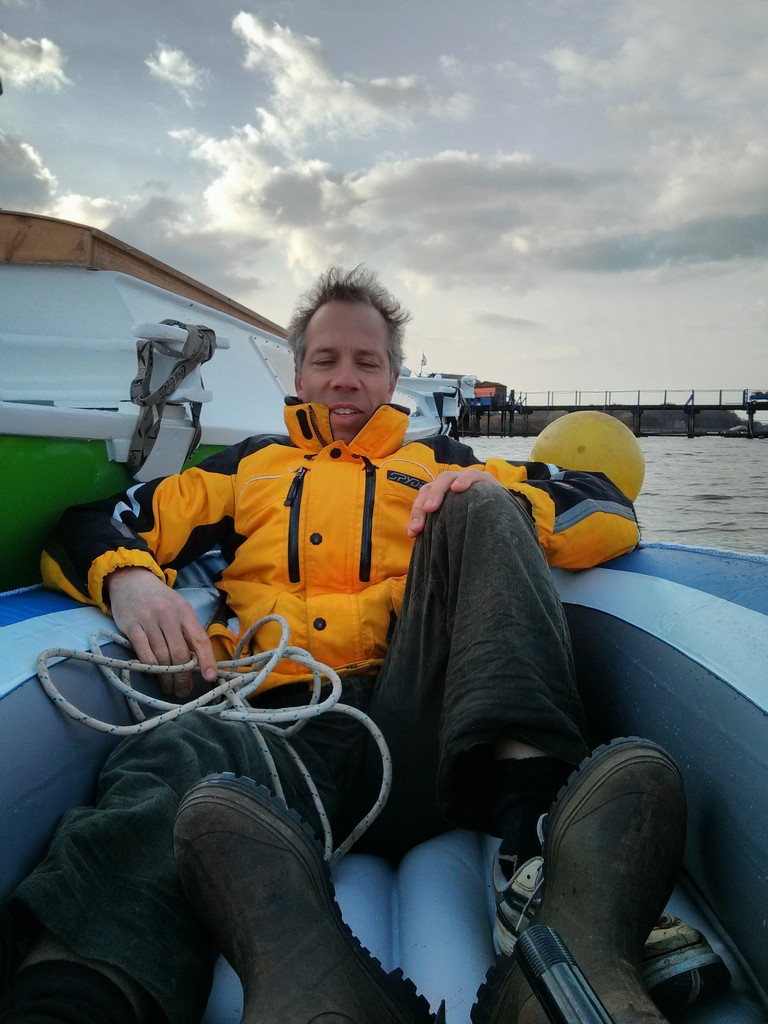 Saturday was rigging and departing day. Again, so many jobs plus shopping for provisions. We beached the boat and worked hard all day. Come 5pm we were sort of ready and the car was now in 6 inches of water. We packed down loaded the tool box and remaining fittings, parked the car and fired up the outboard. We motored out of Exmouth with the cordless screwdriver working hard to fit cleats that jammers. 15 minutes later, up went the main and caught and increasing breeze. 30 minutes later we had on the waterproofs in a force 3/4 and the quartering waves washed through the front where the trampoline is suppose to be. On one gust I dumped the wind and wondered if the mast epoxy was really cured!

We pulled into Brixham marina as the evening light began to fade. Being a cat' we needed a wide birth, and we were duly placed amongst the luxury yachts. We set up the temporary tarpaulin tent and dressed for dinner! The next morning the sunrise had taken away the panic pace of the previous 2 weeks and we finished a few jobs in normal time. We laced the front tramp as the sun's warmth came through. We set out for Dartmouth.

Sunday's sail down to Dartmouth was in a light breeze with a short motor. The weather was perfect as we entered the river mouth. The wind came in behind and styled up passed the Royal Dart Yacht Club with the cruising chute raised high dragging us up river.

We drifted up further on the tide and calculated that we could make Tuckenhay in time and be away on the morning ebb. We called the pub and booked the pontoon mooring and a table. Perfection. 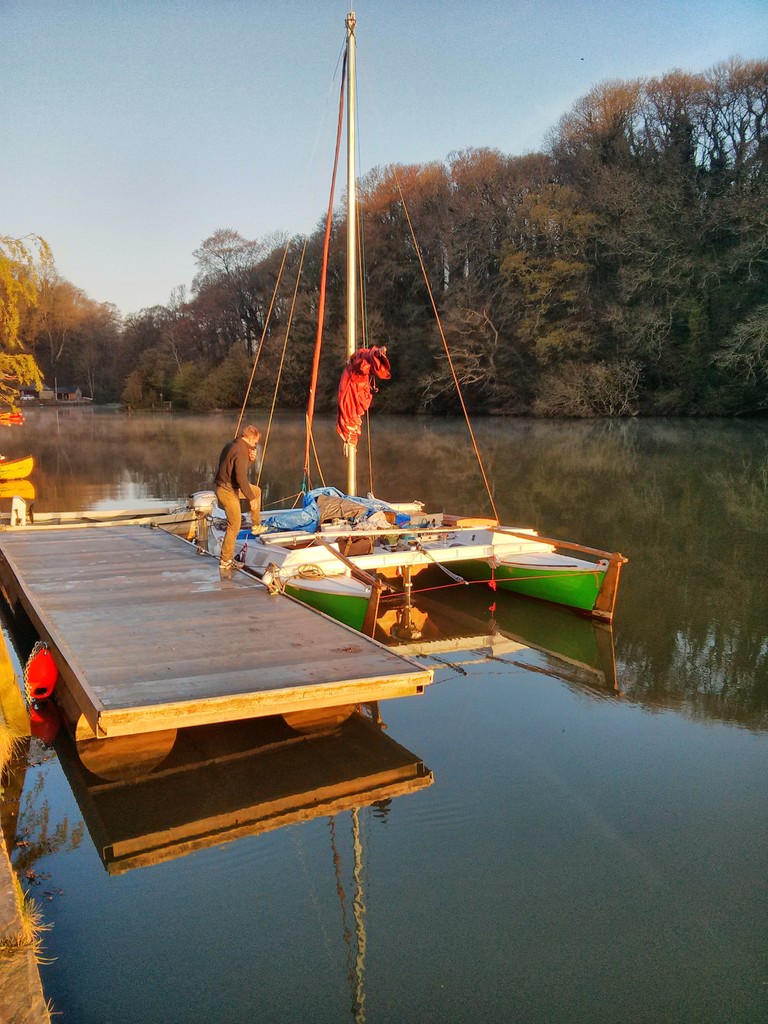 After a heavy night, we were woken by a glorious dawn chorus and what seemed like a fight between the ducks and geese. The sun rose as we drifted away. The smell of our cooking sausages hung in the mist as we made our way down river. 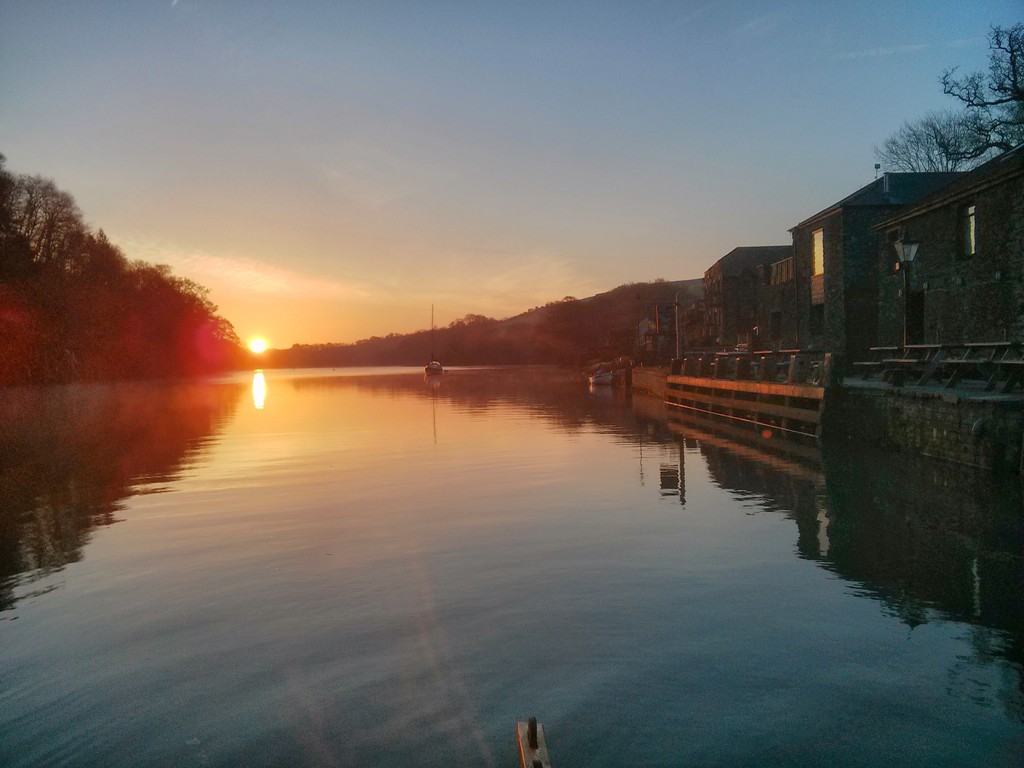 We eat breakfast at Dittisham and drank coffee passing a huge American yacht coming in to the river. We put our life jackets on as we passed the lifeboat towing in a yacht with a failed engine. We set sail into the wind and wondered if we could beat our way all the way home. We got to a tack that would pass Berry Head by 11am. The wind then duly dropped and from then we motored and sailed a little.

We made the mooring in the Exe at high water by 6:30pm. We were sunburnt, tired, hungover, happy and afloat. Happy days.

Congratulations! Its amazing how even a small boat can be so much work. How have you done the main hatches - do they slide forward on a rail?

Thanks Roger and others. You're so right. I've put in so much work. The last two weeks were too much. I worked most days, neglected work, didn't see the family, spent too much money. I can't imagine how much work a big boat would be.

The hatches are the old ones (as are the rudder). I still need to rebuild these. One old hatch is a simple lid. The other is shabby but is to the original design, which on reflection is a practical and simple design. You can open from either end, it doesn't block the view, or scratch the deck. I'll take some time off, then build new hatches much to the original design.

One question, do waves occasionally hit your platform?

Yes. Outside the Golden Gate here we get short steep waves that can give the underside a good hard slap - it can be a bit disconcerting, but I don't think it does any harm. The deck can lift a bit, and I guess this dissipates some of the energy. I have also had waves wash right over the deck, again with little apparent effect.

Do the original hatches let in much water - I'm still think about returning my hinged hatches to standard?

My new platform has a slightly lower fairing as I built in a hatch to take the fuel tank. We had a stiff breeze on the first run and the quartering waves occasionally slapped the platform. The transom descends a little further than the fairing to take the lower the engine. This caught the water a little and caused some spray. (The lower engine was a dream, no cavitation with the standard prop!)

No, I've not seen any leaks from the standard hatch. I'm a convert to this clever design. I think a rubber strip around the inside to interface with the cockpit rims would be good. A good fit will help also. To this end, I've seen picture of a clever technique. First arrange a slim packing strip around the outer cockpit rim. Then cut, arrange and clamp the new hatch rim wood around the outer rim held slightly off the wood by the packing. Epoxy the joints and remove. Now fix the plywood tops to the perfect fit rims and then finish off building the hatches.

Just received my Tiki 21 study plans! thanks for this story, it is fueling my desire to get started.

That's absolutely brilliant Ian!  Now you're getting the rewards after all the hard work.  Thanks for sharing your story and pictures with us!