The boat, a Wharram Tiki 21 called Gratitude, was finally purchased back in November 2013 from a friend. Kindly, he'd allowed us to borrow it during the summer. This gave us a chance to try it out, and for everyone to get comfortable with sailing. I was in no doubt, but my small boys and Monika don't always see adventure opportunities as I do. I always knew I'd love it.

We'd had several great days out in September. Some were better than others. But the less straight forward excursions were the ones I secretly liked. Arriving at the quay in Topsham on the Exe and 8:30pm in fading light, is my kind of a day. My friend, Gratitude's owner, seemed to often be "just" passing the quay on our return. He was, of course, just being friendly and wondering if the boat and its crew were safe and sound. And, what better excuse to have a beer in the Lighter Inn and share the day's story.

With the deal done, the cheque was handed over, and the Met Office forecast a huge storm (Jude). I had nightmares. I foresaw owning a pile of matchwood;  my first sailing boat, wrecked the first day. At that time it had a temporary home at Hannaford's Quay in Topsham, a drying quay with a wall to one side. I set out the day before Jude and nailed that boat to the river and sounding walls. 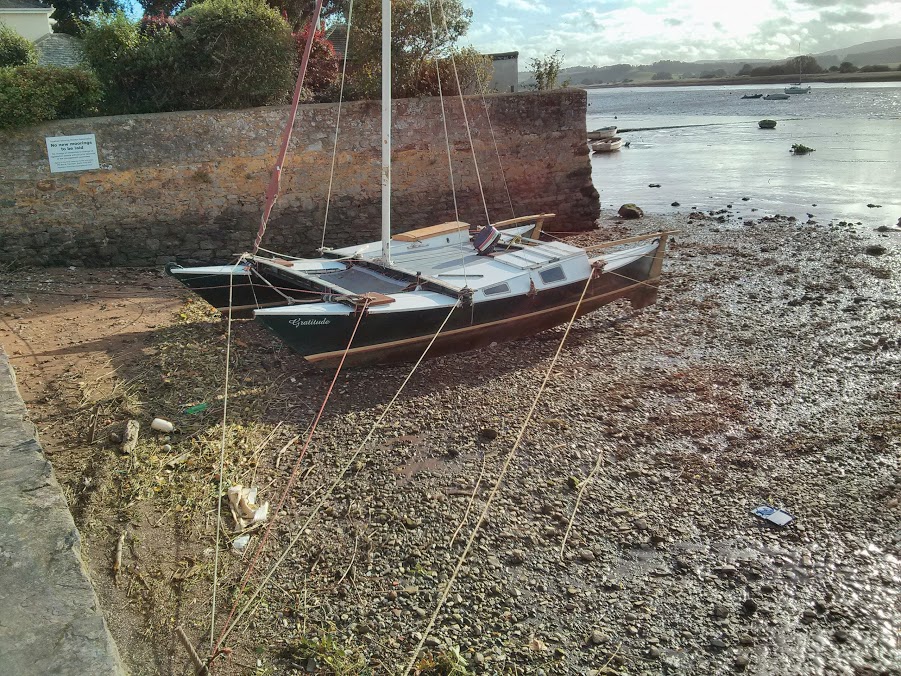 It wasn't going anywhere. I went down to the quay the morning following the storm amid radio reports of coastal disasters. Gratitude was parked in scoured trenches of sand and stones around its keels. Its lines were tangled with detritus and the beach was strewn with driftwood and plastic. The boat was just fine. 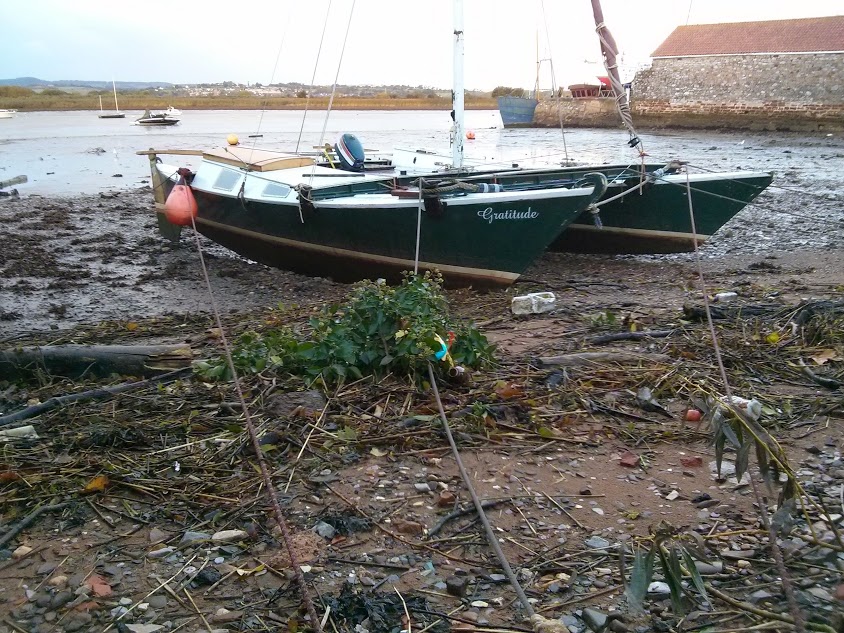 The storm was a scare. A drying quay for the winter is a clearly a recipe for trouble, and so the plan was to move the boat to my brother's farm for a warm dry barn layup. My timing was perfect. Another bad storm passed the night before I set out. I left the house in the dark and arrived to find the quay awash with debris, but the boat was afloat. Seeing I had time before the ebb would leave me aground I waited in the car until there was a little light. Making an over optimistic assessment of the conditions, I finally jumped in, up to my waist in cold water, wood, plastic, foam and various dead things. I waded 15 feet out and clambered aboard. No going back now. The engine started and I slipped the lines I'd previously prepared. I reversed through the puff of two stroke and I was away. 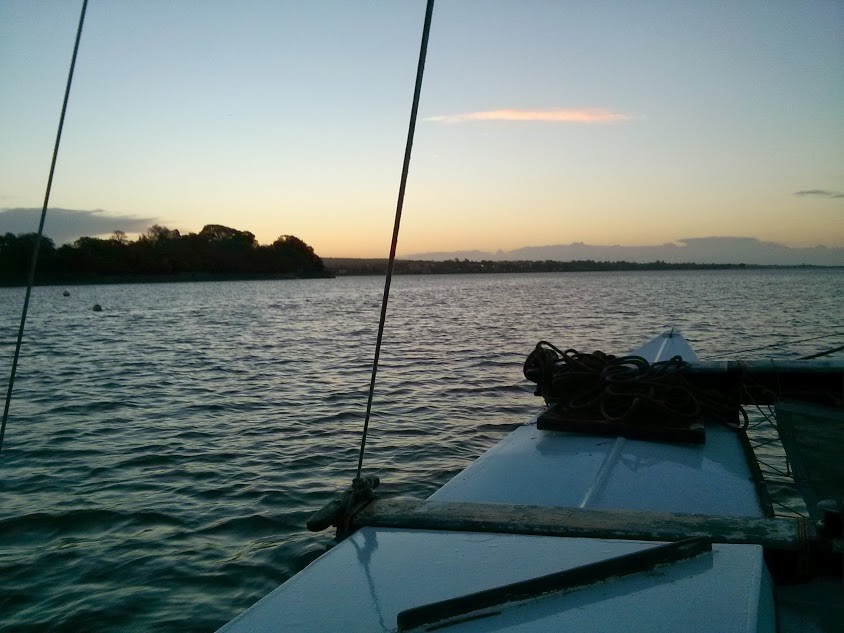 It was cold, the light weak, but it was exhilarating. I motored down the river alone, no other sign of activity. After all, it was still only around 6:00am after a storm. I soon arrived at the slipway I'd inspected the previous day. The surprise was how big the tide was. The place was awash. Worse still there was all manner of wood (trees!) washed into the corner. Worse still, the wind was now picking up as the sun's effect took hold. Think! Move away? Go back and find a spare mooring? You've already failed your Day Skipper practical -- you should have gone back home to bed!

I motored away with a plan to lay up and wait for the wind to drop. The wind was by now screaming onto the shore and there was still too much water. I'd planned to beach, not get pinned against a wall. No sooner had I moved off did I begin to doubt how much fuel I had. I DID know the tank was full, but at that moment I could only see myself adrift in half light with a gale across the river. I peered into the black tank. I turned back for the slipway.

Approaching the slipway I could see some stones. The water had dropped a little. Running up I prepared the anchors. I would drop them, approach the wall where I knew I could attach a line, then kedge off between the line and the anchors and wait for the ebb. Yer right.

Soon enough I'm in the water pushing the boat off the wall against what now is a gusting force 6. The motor had snagged the anchor line and things were cascading out of control. Let's face it, I don't know what I'm doing, do I? But I've been in some serious waterborne scraps before, and I felt some kind of perverse calm; after all, I'm not upside down. Somehow I found a washed up tree with the keel. The wind dropped as fast as it came and things were beginning to straighten out. Within 10 minutes I was on the bank, the boat was on tight lines and the water was dropping fast. And, that wind had gone.

I walked back up the half mile along the Goat Walk towards the car dripping wet and looking ship wrecked. "Morning", acknowledged dog walkers who I caught looking back at me like some sort of drowned rat. I returned home, showered and climbed back into bed. "How'd it go", said Monika. "Oh Fine", I said.

Later that morning, my brother and I dismantled Gratitude. The weather gave no clue to the dawn drama.

Months have gone by. The boat came out and made its way up onto Dartmoor to its winter home. 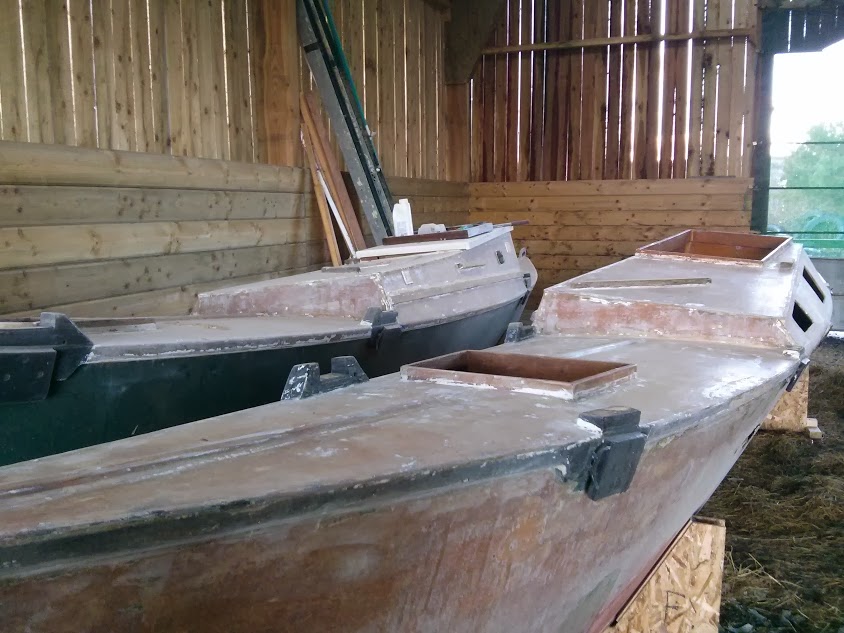 I'm only planning on painting it once, so I'm doing it properly. I've begun stripping it back to the gel coat. This has revealed a bit of a hole, but I've patched bigger in a kayak and finished the river. 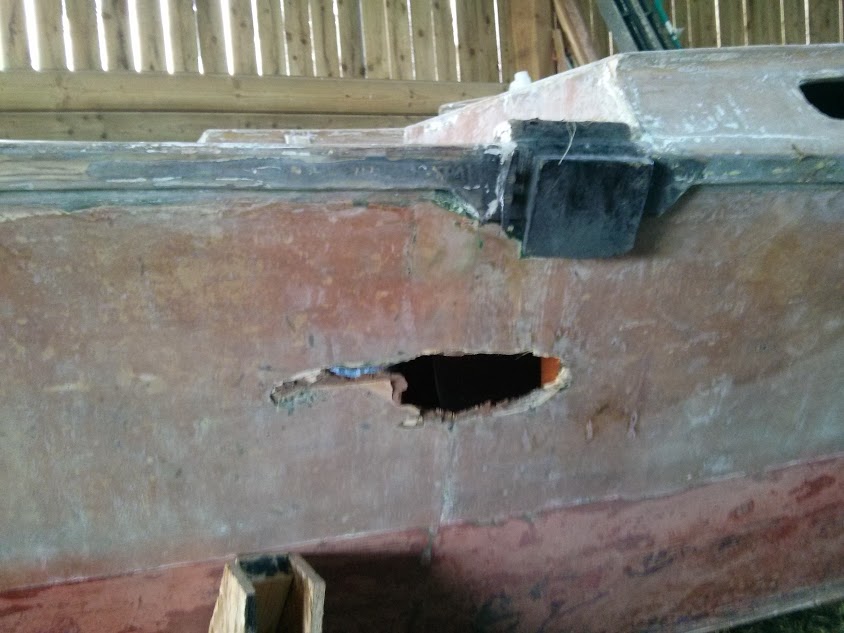 The mast turns out to be a problem. It's a long story, and I won't go on, but it's no surprise it's got this way. I stood on the end and it broke. I'm amazed we sailed it and it didn't collapse. I've already bought an 6 meter aluminium tube and will use the good bits of wooden mast to make end pieces. I still felt some sorrow when I made the fatal cuts and consigned the old wooden mast to history. Someone put a lot of work into it, back in the 80s. At least parts will live on, inserted into the less attractive, rot free aluminium. 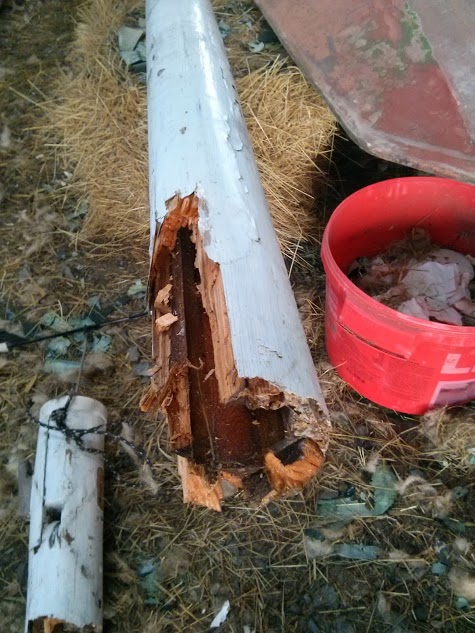 Back home, the garage has been cleared and cleaned for the construction of new platforms. I'd put my foot through one during the single handed take out adventure described above. England in January is not a warm place. With my heater flat out, I could only manage 10 deg C. Not the 18 degs minimum for epoxy, so I've cleared our small glass conservatory. The under floor heating wasn't working as it hadn't been used in years, due to the pointlessness of heating a single glazed glass box. I flushed the water pipes through and after 8 hours the concrete slab warmed and I finally achieved the tropically temperatures required for the resins. 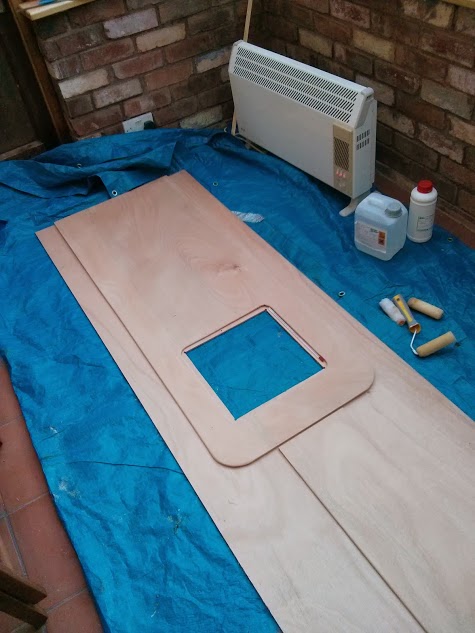 Many years back I built kayaks. The first at the age of 16. I even worked in a glassing shop. Still, coating and laminating ply for the mid platform was a learning experience. I mixed too much epoxy (yes I know now!). This stuff goes miles! I coated everything and wasted some in an overheating pot. It goes off way quicker that polyester!

I just hope it all works out.

With tales to tell the grandkids, Ian! ;-)

Wow, great blog.  There may be something about boats that is more of an instinct than a rational decision.

It's cold here too.

Thanks for the comments. I'm still laughing at Andy's comment. I think I should get a T-Shirt with a Wharram logo and the strap-line, "More Instinct than Rational Decision".

Great blog Ian, thanks for sharing it with us!

Are you taking orders for the T-shirts??

Take a look at the photos below. They show the damage to the wall and path caused by the recent storms in the UK. This is where I took Gratitude out as described in the blog above.

The collapsed wall at the end is the same wall I was blown onto.

This is the path where I managed to tie up.

I'm glad to be out of the water. Hurry up the spring!