I am interested in doing what Scott Williams is building instead of a trampoline between the mast beam and fore beam ie a timber deck.Now how would one go about securing this deck,especially to the mast beam,i know boatsmith has done this but if anyone has some pics it would be mighty fine to have a looksee.

I will soon have the framework assembled for my deck and will post pictures when I do.  I discussed different ideas about this with Boatsmith as he as also built 3 Tiki 8-meters with slatted forward decks.  The key is to keep the deck as light as possible while still building it to adequate strength.  Mine will be supported buy fore and aft stringers hung under the mast and forward beams, also supplemented by the athwart ship beams to which the planking will be fastened.  These beams will rest on the inboard toe rails, supporting the deck in the same way the cockpit seats are supported on the cabin sides.

Scott thanks for the heads up,as always you fellas have some innovative ideas,i was shall we say''all at sea''as to exactly how to fasten  the deck to the beams but still allowing for movement or give.There is a timber here in oz called western red cedar that is lightweight and supposedly quite rot resistant that i am planning on using as teak is just too expensive to be an option,although i am a bit worried about its strength.

i have built an umiak, which is a skin on frame boat that has a tied together frame. The frame cannot be rigid as movement is required.this experience has taught me much about tied together boats.

I am also planning a plank deck for the tiki21 and the Proa 30 i am building, as up here in pacific northwest of america it is mostly too damn cold for trampoline sailing. My plan is to use lashings of dynex dux synthetic line to secure the deck planks to the structure using  constructed knots as can  be seen on  Caligo's site where they have various 'hardware' made  of this synthetic rope. We will be using what  are  known as 'block' knots on  the planks. These will be hung from the main beam and  the fore beam as a structure. That  is to say the whole of  the plank deck will be tied together first before being secured to the boat. This way we can reduce the amount of  fiddling around during set  up to only a few strategic knots....we will use frapping to tension the  deck in place.

we are using local cedar that  is reasonably cheap to build the deck.

make any sense at all the way i explained it?

Your idea makes a lot of sense and the frapping allows for maximum movement,which if done correctly i suspect will be uber strong.Also this way seems to be a hybrid between a tramp and a fixed deck.

I've now completed my wooden foredeck and posted photos on my blog, along with a description of the design and construction process.  Hope this helps:  http://tiki26element2.blogspot.com/2011/10/building-forward-decks.html 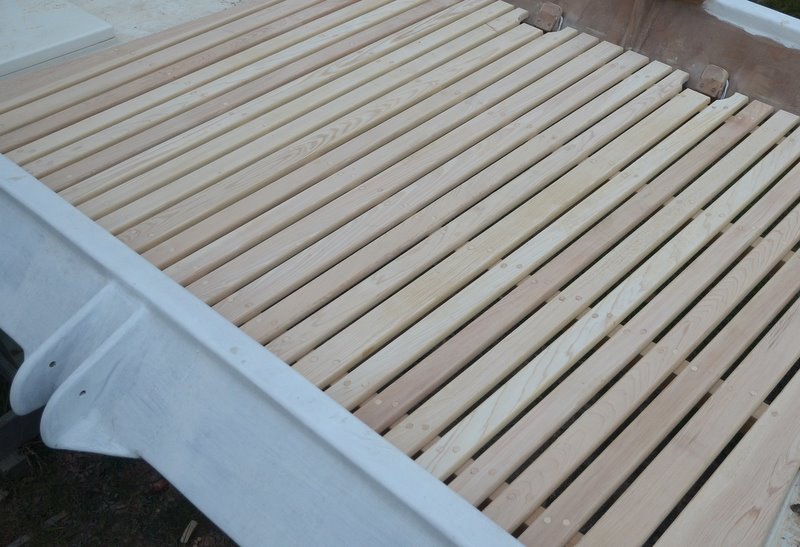 Scott thank you for the wonderful pics and description of the work at a time that must be most difficult for you.Your build is the benchmark as far as tiki 26 go and has been helpful to me and i am sure many others too.

Permalink Reply by Scott Williams on October 26, 2011 at 8:16pm
Thanks Paul.  I'm working on my cockpit now and hung it from the beams for the first time today.  Pretty cool to be walking on deck finally.  I'll post photos of the cockpit project soon, along with how I'm building the under seat storage compartments.

I'm in for the cockpit, for if I have the time, that will be the next big project!

Permalink Reply by Lawrence de Robillard on October 30, 2011 at 2:34am
We have built a stern slatted timer stern deck  and found it heavy, prone to deterioration and not secure enough for our liking. So we have built the rest of our decks from closed cell styrofoam epoxy and glass and found it strong, lightweight, practical and maintenance free.