Took Vaea out for a sail a few days ago: the new sails are fantastic! We
(me and a friend from the marina) were met by a wall of fog that would
hide and unhide the breakwater at L. A. harbor, so we had to sail within
the large area at the end of the main channel. But there was a good 10
knots of SW breeze, despite the fog, coming off the Palos Verdes
peninsula, so we had a close and a broad reach to work with.

I left the main sheet traveler centered, and with my friend at the tiller
keeping the apparent wind as close to the 55 degree arm on the windex as
he could, we were making 9-10 knots, with the occasional 12 knots. This
was the first sail on a tiki 26 for my friend and it brought a smile to
his face.

He has sailed monohulls under 32 feet and thus the smile. .
.Unfortunately, I was too caught up in watching the new synthetic
standing rigging, and handling the sheets to haul out the camera.

After the sail, I did have to tighten up the rigging due to not
pre-stretching the forestay with the car: the new main was pulling hard
and tightened up (thus lengthening) the 12-strand braid well! I did
pre-stretch the shrouds and bridle using the car previous to raising the
mast.

The Southern California Bight has been uncommonly cool and foggy this last month; usually we are contending with the hot Santa Ana
winds this time of year. . .

Other days are coming, of course! Hopefully with pictures!

In your post you write "the new sails are fantastic!" - which reminded me of something. I am going to make all the sails myself. Which in itself is very feasible when you know what to look for in a good sail. I have already designed several headsails for different conditions. But I am unsure about the main because the plans give so little 3D information. Only the outline is presented but there is nothing about draft-depth or draft-location. Can anybody say anything about this. For instance, is the sail totally flat when you lay it on the floor, or does it wrinkle in strategic spots. Anyone who can comment in a way that may be put to practical use.

Greetings from The Netherlands,

The luff-sleeved Wharram wingsail is dead flat; draft/camber is created as the luff sleeve rotates around the mast, with the main sheet(s) and the downhaul available to locate the position of the draft.  If draft/camber is built-in, the sail will always be baggy, leading to the inability to trim or ease properly.

Here is a shot of my Rolly Tasker wingsail right after I hung it for the first time: 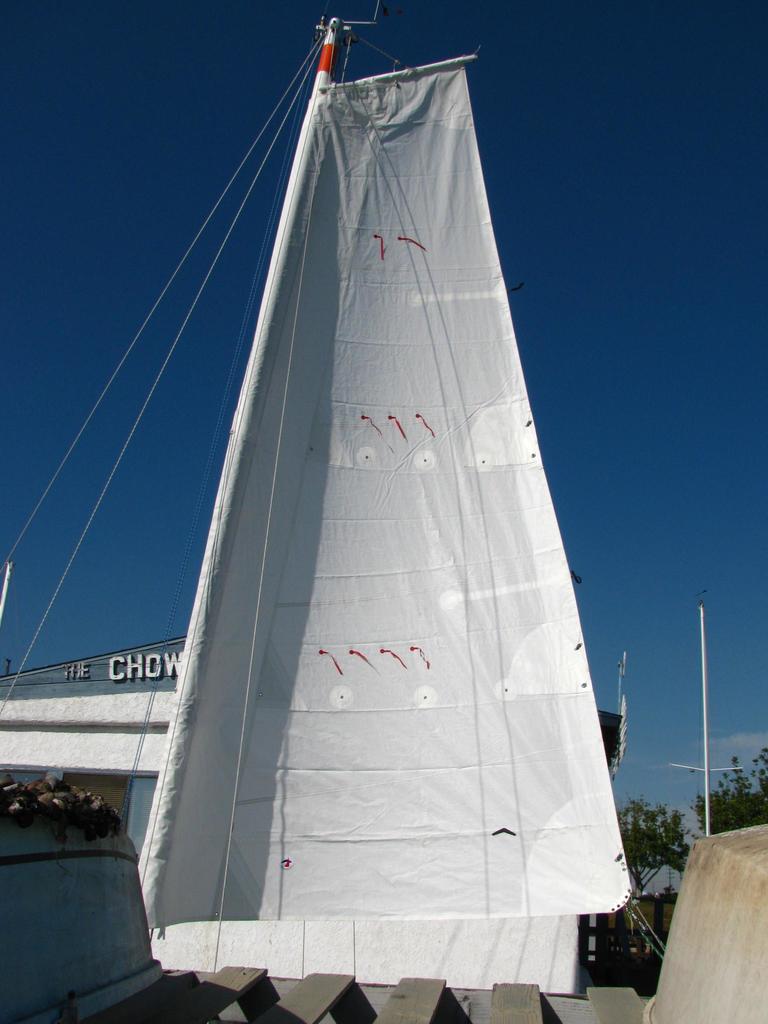 ah so you got out eventually Kim,with all the stretching and so forth what are the advantages of synthetic rigging?