There is a cautionary tale in here somewhere.  So, the wife and I have been busting our asses to get our Hitia 17 in shape to sail at the Hui Wharram this weekend.  For those of you who don't know, the wingsail modification for the Hitia 17 is based on the Tiki 21, but some final measurements for the gaff must come from the actual sail.  I'd received the sails on May 6th, checked to ensure that what was on the bag matched the tag that was on the sail in the bag, but did not remove and layout the sails.  You know where this is going, right?  When I removed the mainsail from the bag, to get my final gaff measurements, much to my surprise, I find out that the sail does not have the pocket for the gaff!  It is, in fact the standard sprit rigged sail for the Hitia 17.

The loft says that they built the following mainsail for me:

Including 1 window and 1 reef

This is also what all the tags say, but that's not what's in the bag.  So, at this pont, the factory is in denial, the dealer is confused, and I'm hearing all kinds of excuses, to include the sails got swapped, and someone else has my sail.  ...Right.  Oh, and since I had to take pictures.

I have great looking sails, but they won't work on my boat.  I am not pleased. 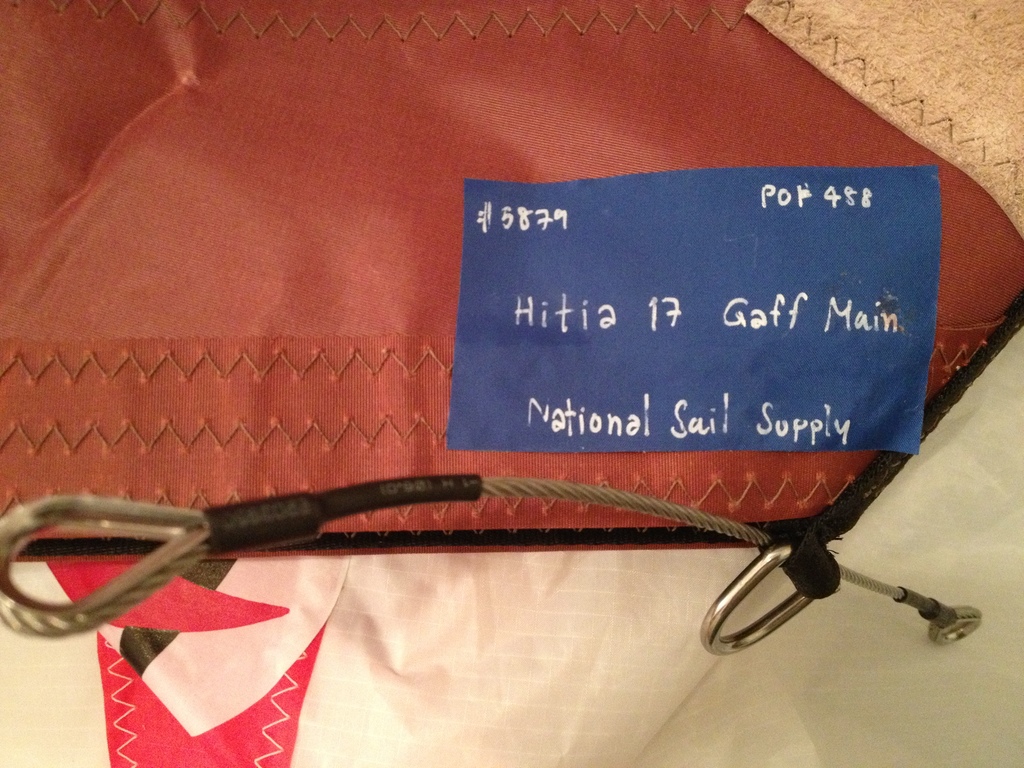 Dont blame them, it is just a mistake,they will send you soon the good one free transport . I am in the commercial field and i confuse goods references , colors, clients name, invoices, every 2 months ( 1 month?1 week ? ) . you know why ? because i spend to much looking, dreaming future sailing, on  this website... et merde clients suck . Funnily i was upset to when i received my main sail 3 month after my order to jeckells ...

are you talking about rolly tasker in Phuket/thailand?

i went there to get a offer for our new Crab claw man and the headsail.... 1000us more expensive them LEE sails and they did not want to come on the boat to measure the sail., i have to bring the old one or all the measurements...

i found this very expensive if you know that the people who work on the sail earn only 30 dollar a day.

i will get my new sails from LeeSail end of the week... will tell you what sup price i will have...

by the way... most sailors here in asia do not like tasker. and when we where asking for new sails made. they offer us to have a look through the pile of sails, they have in stock because???? never picked up etc... smile

by the way... of course mistakes happen... but if i send a sail via post around the world. i have to check it twice... nothing is more business killing then receiving a packet with the wrong item... tasker should know this and it is a sail and not a envelope that is on the way....

waiting 3 month for a ordered sail... doesn't sound like a good service for me too....

I don't judge a company by whether or not they make mistakes, but in how they handle those mistakes.  While I'm not pleased about missing my launch date, my ire is being increased by how the matter is being handled.  Since I'm dealing with one of their U.S. agents, it's him I'm talking to, not Rolly Tasker Sails.

In my mind, their agent has made three crucial mistakes in how he has handled my problem.  When I initially contacted him by phone about this problem, he laughed, he thought it was funny.  I pointed out, in detail, that I failed to see the humor in this situation.  His next mistake, was when I asked if he'd checked the sails before he shipped them to me.  He didn't, because he rely's on the loft to get the specifications right.  Yesterday, during our second phone conversation, he made his third mistake.  He offered to give me the contact information for the loft manager, so I could deal with him directly to correct this problem.  Excuse me?  If I wanted to deal with a 12 hour time difference, language issues, and exchange rates, I wouldn't be using a U.S. agent.  He seemed to think I'd have more influence with the loft than him!  The final straw was the last email I received, where he requested a picture of the full mainsail, to expedite the issue.  Not going to happen.  The picture shown above has all the details necessary- guides for brailing line, no luff pocket, and yet the "correct" tag.  Apparently, the customer's word is not sufficient.

In a previous life, I got a B.S. in Industrial Management from Georgia Tech, so I know more than a little about running a factory.  To produce a custom product, to the highest standards, but to the wrong specifications, and to have it delivered to the customer, half way around the world, indicates a fundamental flaw in their Internal Controls and a failure of their Quality Control Standards.  How many people laid hands and eyes upon this sail, without realizing it was wrong, before it was delivered to me?

Additionally, I've got an MBA, which included post graduate work in Small Business Counseling, and over 25 years experience being self-employed and dealing with customer support issues.  In this case, their U.S. agent is adding to the problem, instead of being my advocate, and being part of the solution.

I get it.  Nothing the factory or the agent can do will get me back my planned launch date.  Nothing they can do at this point is going to make me a happy customer.  But, two days into the process, and I'm still being asked to prove that they made a mistake, rather than being told what they are going to do to fix this.  What I want to hear is- the replacement sail is being made, the date it will ship, when I will receive it, and when I'll get a UPS call tag for the wrong sail.  An apology from Rolly Tasker Sails would be nice, but I'm not holding my breath.

the loft manager is a American guy. i think i remember the name john...??? rooy tasker died 6 month ago i guess. hiz brother i running the show now... he is 70 years plus and does the pricing and measurement for the sails... this "john " made the impression of being the pupped the Brother tasker...

he promised me emails and call back to confirm prices but it never happened. i rented a motorbike to see the shop... big one, talked to the guy and god only excuses to here... useless guy...

costumer service??? does this exist still????

BTW, Plan "B", if this isn't resolved by the time I get back from the Keys, is to get a charge back for the final 50% on my charge card.  Then, I'll take the main sail to Omar Sails, in Beaufort, NC, and have him do a gaff pocket modification for me.

We had similar maddening problems with Jeckylls sails back in Britain in 2002 right after launch.  It eventually got sorted but the process was not pretty and the sail was defective in many ways and we had to replace it way too soon because of the many failures.

We have had good sails and wonderful service at a reasonable price from Baxter Sails in Norfolk, Virginia here in America,     baxtersailmakers.com

I contacted, and have received, two email missives allegedly from Mike Tasker (no relation to Rolly), the GM at Rolly Tasker Sails.  I say allegedly, because it's obvious the writer does not speak English as a first language, so I'm not sure who I'm actually corresponding with.

To sum up the two emails, I'm "Threatening, aggressive, and negative" and they are insisting they made me the correct gaff mainsail.  In the second email, in the paragraph right after they insist the loft did no wrong, they state that "it is obviously human error made either here in the sail loft or by our agent in the USA."  A replacement sail will be forthcoming, shipped directly to me.

So, while trying to shift the blame to their US agent, who obviously conjured the wrong sail out of thin air, they are being magnanimous and shipping me another sail.  It's taken four days to finally get some movement and I stll don't have a "warm, fuzzy feeling" about the whole process.

Permalink Reply by wakataitea on May 17, 2013 at 12:17am
i send mike tasker the link to this discussion few days ago... wanted to know how he response... he send me this email back...
Dear Hans,
The customer in question has received the wrong sail.  He is right.  We are making him a new sail and sending it to him.
Where I believe he is wrong is implying we won't admit to the error.  We are not in the business of blaming anyone:  if an error has occurred as it appears to have done, in this case, we want to thoroughly investigage the matter and even change the system if necessary, but there is no point in throwing the baby out with the bath water.  We have a need to know where it started and ensure it doesn't happen again.  The sail design plan for his sail clearly shows we made him the correct sail and remember from the design stage to quality control it passes through a number of people and is signed off, so logic says the correct sail was made.
What we haven't been able to determine is where this sail is now if it is not with the client?  It is not in the sail loft, nor does the distributor appear to have it.  Once we have discovered where it is we will be able to determine where what we think is human error occurred and fix the problem.  It is not something which happens once in a decade, in fact, off hand, I cannot think of another occasion where we have had a similar experience and I have been with the company for over 15 years.
I hope this answers your question and thank you for being concerned enough to discuss it with us.
Kind regards,
Mike
... we will see what will happen now... i am really fed-up with this problem, that the customer is the idiot every time... things like this has to be made public... mistakes happen, we all know this. if the story has a happy end, that fine... if not.... we have to stay away form his kind of companies in the future... this will bring us maybe the good old customer service back...

Quality from RTS is OK compred the price. How ever I have a similar story about my mainsail. They had to do it twice, since somebody confused the diagonal mesures and nobody noticed it until it hung on my mast the first time. It looked like a overaged handkerchief or a squarsail and in the lighthouse at Ao Chalong they were wondering  "what the hell the Wharrams did now again come up with".  We made a joke out of it and told them this would be the new Tiki racing sails with extra "vortex lift".. How ever RTS made a new one without any further discussions.  Shit can happen it should just not hit the fan....

Rolly died on the 22nd of June 2012(2012-06-22) with 86, it is not easy to find succesors who can run such a big business.  I have the feeling that a topclass sailmaker who loves Thailand and is willing to learn Thai could have a very warm welcome over there. I will order again from RTS if my old sails will have to be replaced.