Steering for the Pahi 42

I am about to attempt the steering for my modified Pahi 42. The rudders are in and functional but I have not yet decided how I shall connect them to the helm. Any insights, comments and advice would be appreciated. Lawrence

Congrats, Lawrence. Setting the rudders can be damn hard work. I did it once solo under the caribbean sun and if I get one dollar for each time I lost a wingnut through the rudder slot, climbed down, picked it up, climbed back up and tried again, I could throw us both a damn nice party until the break of dawn.

Re the "how to": From experience and many, many trials and errors I do recommend to stick as strictly as possible to the geometry, i.e. location of all blocks and angle of all lines, suggested by Wharram. The more you deviate from it, the more likely you build in rudder angles where lines go slack and tend to tangle, with all the awkwardness that goes with a stuck rudder. Not to mention the life-threatening situations than can arise in high winds and the sizeable waves you should steer really precisely instead of looking for the spot where the steering line is stuck. Really. Seriously. Build a beautiful custom steering wheel. Or build in an off-the-sheld steering wheel. Place it in the middle or to starboard or wherever. But stick to the geometry. Fair winds!

Thanks Mike.  Unfortunately I have deviated too far from the path to do more than use the basic concepts as our vessel is a Wharram in spirit only. I shall have to muddle through and hope I get it right.

Permalink Reply by Bill of Whitsunday on April 21, 2013 at 5:19am
We use non stretch ropes, a few turns around a capstan behind the helm, then to blocks then the rudders above the aft deck. Some of this system is visible in my photos.

Lawrence, I can´t judge the appliability of the wharram steering concept without knowing what you altered, BUT I suppose you still have a tiller fixed to each rudder and the tillers are connected by a long, long stick. If you think about abandoning this arrangement, think twice, because nothing beats having your emergency tiller set up and ready at hand whenever you need it. I myself needed it a couple times, because I did some experiments with the steering lines myself, and of course all those "creative" setups work perfectly well until you really need them, i.e. when you are running down the face of a wave at speed. I "emergency-tillered" Mother Ocean off the Albanian coast all the way to Corfu, in the middle of the Atlantic Ocean on the way to St. Lucia (I fixed a spinnaker  pole as a long auxualliary tiller reaching into the cockpit and we steered with that setup for three days and nights, touching the 20 knots once, and still being in perfect control), and in a couple thight spots, anchorages and ports, because if a shaky setup decides not to quit in high winds, it is just because it thinks quitting during a difficult approach will be more fun. So this is a basic concept I would really recommend to stick to. Maybe details of what you did or intend to do might enable us to give more qualified advice.

Ah, the setup you described is still in place in spirit- except the stick is an aluminium pole and the tiller arms are stainless steel. The bit I am having to work out is the helm wheel to chain to cable and then to the tillers.  I shall post some pics in the next day or two so you can get an idea what I mean. Tke a look at my pics and you will see in the launch pic how I have modified the rudders and other aspects..

Hi - I have used a different approach, completely un-Wharram I am afraid! I use a heavy duty Ultraflex steering cable system (as used for outboard motor boats). I have a twin cable system, so a single cable goes to each rudder. Theoretically I don't need the connecting rod between the two tillers, but I have it anyway for extra security. There is also in-built redundancy in the system, as one cable is able to control both rudders in case of damage to the other. The only time I've had a problem with this is when ice had formed inside the cable covering tube, but I hadn't been using the boat for a few weeks before this, allowing moisture to build up.

Sounds cool, Andy, and saves lots of hassle - as long as the thing doesn´t catch too much salt and corrode, and as long as you are able to diconnect it quickly without having to fumble around with tools in exposed locations.

Yes, you are right that it does need to be checked over now and again. As we sail in the Baltic the salt level is fairy low, but of course there is still some corrosion possibility. It is easy to disconnect - one bolt attaches cable to tiller, but of course not the greatest place to work in a seaway.

Mike and Andy, if either of you have any photos I would love to see them for inspiration. I need all the input I can get before I act. Thanks!!

O.K., Lawrence. Here we go. An explanation first: These pics were made when I repaired my then 15 years old Pahi in St. Lucia, preparing to take her back across the North Atlantic. She had caught termites in Grenada, and I had to rebuild the whole stern of the port hull in the open, in a, let´s say, difficult climate, and of course I ran out of time in the end, so some things might look a bit makeshift, but they got me through a very gusty Tortola-Bermuda-Horta-Lisbon passage and then through half the Med to Northern Italy, so while some of the stuff was indeed made "quick and dirty", I must have done the important things right. One thing I definitely got right was to throw out the old Goiot steering column, wheel included, and the attached steering rope setup which looked good and worked bad. Instead, I build a Wharram plan-conforming steering wheel and rope drum and steering rope setup. It worked like a charm, i.e. it only got stuck once in 6000 miles, this by the rope jumping off the drum when there was immense pressure on the boat from surfing down 8 to 10 meter waves at up to 14 knots under bare pole in a force 9 gusting 10, and with the way it was set up, I only removed the lid with the compass on it (two bayonet latches), accessed the drum and set it back to working condition before the next wave hit, and that is one of the reasons I can sit here now and tell the tale. Here we go:

Self-built steering wheel and drum, all made from plywood on an stainless steel axle I had made at the Rastaman welding shop in Rodney Bay: Here is the Wheel in the steering column I set into the cockpit, set up so that you could steer sitting down, which helps a lot if you have an ocean before you. The wires dangling over the column are the bowdens for the outboard btw. 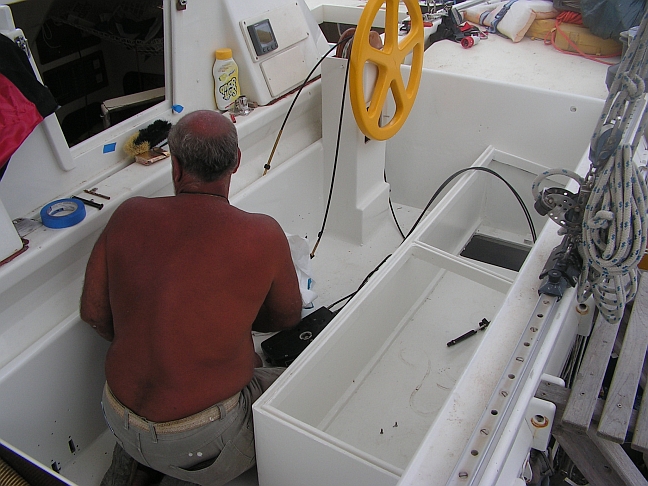 Here is how the rope goes around the drum: Here is Wharram-conforming setup of the lines before assembling the aft netting. One thing I had to do later was tie an a bit of rope around the ends of three planks on the aft walkway to prevent the line from getting stuck or chafing on the planks. No pic of that, sorry, but I guess its obvious. And here is how steering worked. The compass was on the lid of the column, and looking at the pic I realise that I initially used wingnuts and only installed the bayonet latches after arriving in Horta. But I guess you get that idea, too. :o) Wow its  Really simple and straight forward. I was planning to make it more complicated than it needs to be.   My boat has been assembled from parts that have been discarded by other vessels. For example I have an aluminium steering binnacle with a stainless steel helm wheel plus an axle and gear cog and chain. I am planning to link either  end of the chain to rope ( spectra or dyneema) and take it via blocks to the steering tillers which are linked by an aluminium pipe identical to yours. I was having sleepless nights wondering how to fasten  the turning blocks and take them under my aft deck. Looking at yours I can see its not a big problem at all! How many turns of the helm do you need to make from lock to lock?

Wharram defines three turns of rope each direction, six in all, and it is about five turns lock to lock, but do I understand correctly that you do not have the original plan at hand? Because this includes a plan sheet describing Wharrams approach perfectly well, drum diameter, position of blocks and all... - consult that if you have it and let me know if you don´t, maybe I can find mine and make a photo or something. Re steering colum: I had one. What eventually led me to throw it out was the humidity problem: The thing stands in the cockpit, and the steering lines do not run into a nice dry hull like on a monohull, they either run through a hole in the cockpit floor or through a hole in the column over the cockpit floor, and therefore the inside of the column will always be humid, means the steering chain will sooner rather than later rust and lock up, and the locked up chain will jump off the cog wheel. Go figure. If I were you, I would diassemble the column and replace the cogwheel with a rope drum. There might be one available as a spare part from the maker of your column. Or go to a workshop where they turn one from nylon or some other plastic material.