Why nails with epoxy?

On the plans, lot of nails are used to hold pieces with epoxy. Epoxy and clamps or under pression with some weight is not good enough?

Fantastique, je comprends tout. Thank you Martin. Is it Portugese?  I understand this, the pression on a hull, of course, but since it is said that the epoxy joint is stronger than the wood itself, I do not see why nails or screws are used permanently to keep pieces together. Is it only to maintain the plywood while the epoxy cures, or does it add a structural strength? However, I agree, better to stick to the plans, it is just bare curiosity.

When you joint one timber with one ply, you need one clamp each 20cm or less. If you use space inter clamps bigger then this, your joint will be fat, like waves in ply. In this case you need a lot of clamps, screws or nails works fast and better.

And have some places in my boat which I use screws, only for security. Like a timber 4,5cmx4,5cm in crossbeams. It's suport all cockpit...8 people !!! 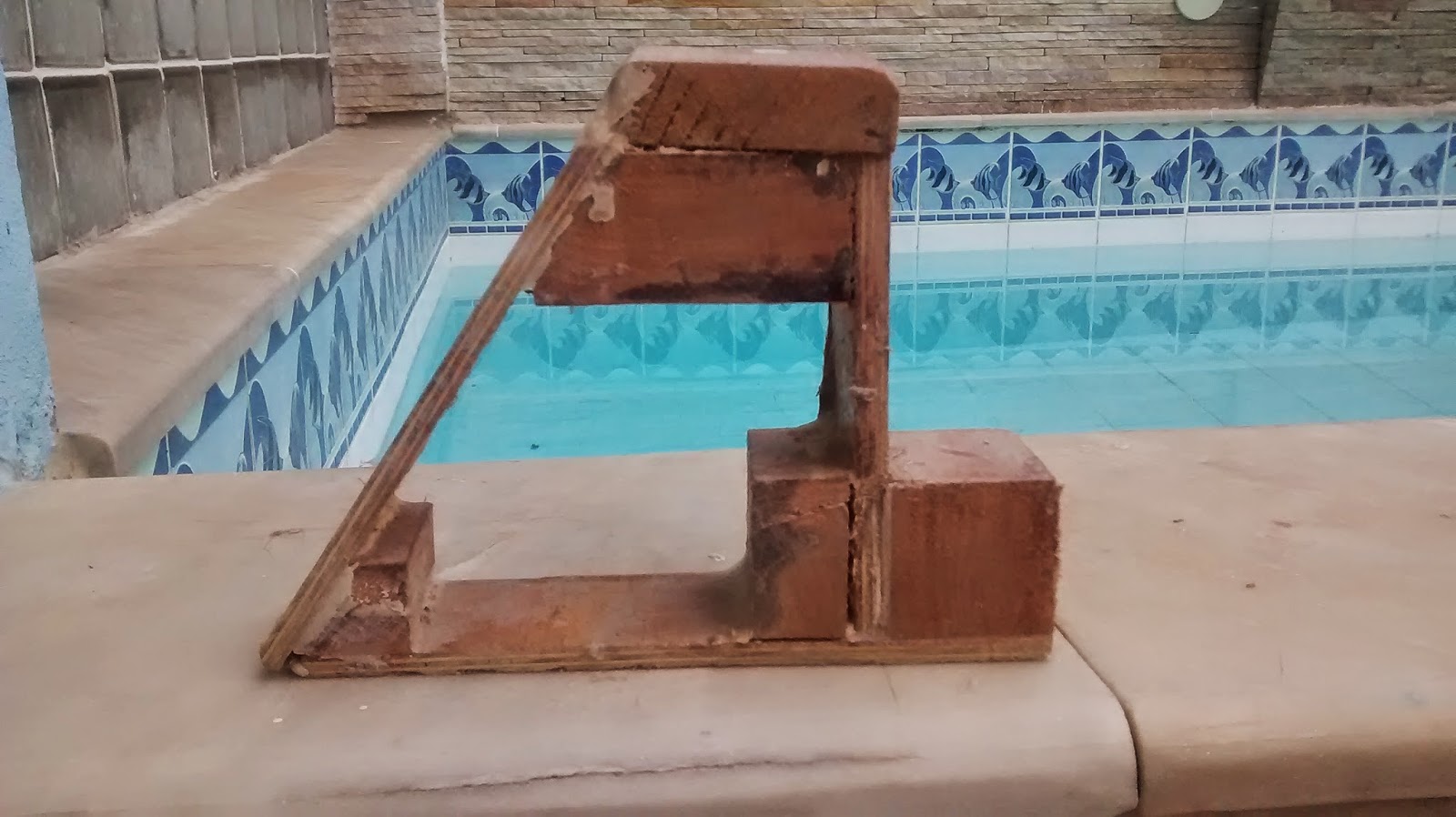 Permalink Reply by Éric Bouvéron on May 4, 2015 at 10:47pm
Thank you all. Martin, very good point about the possible waves, and, Chuck, your site is great. Plus Texas was a dream to me when I played cowboys and indians in my young age. I am less ambitious than you, my goal is a Tiki 21 and, if all goes fine, I will start in July.
Thank you again.

have a look at raptor nails.. Plastic nails that are epoxy friendly, pricey but friendly....

The thing you need to know is whether the nails are there for structural purposes or there for clamping purposes.  My sense of Wharram is that they are there for structure.  Shear clamps will delaminate after a long time, and the inside of the of Wharrma isn't sheathed so in a marine environment you will get lots of cycling of the humidity gradiant in the wood.  Probably isn't going to happen but we do have a history of butt block failure in wooden multihulls going back to Piver.

The reason I think Wharram has them there for structural reasons, is a) they do provide structure, even though a wood/glue/wood bond is theoretically sound (most people can't tell you the factors that have to be observed to ensure that)), that is not the same thing as saying the nails have no function.  When you get someone saying their glue bonds are 100% (which one would expect), Ask them if they tested it and for what failure mode.  There are a lot of different modes in a boat.

b) it is the way Wharram builds, the boats are largely not haircut.  They don't build them where one structure or detail offsets another, they stack all the rules on top of each other.  If you look at fillet size, for instance the size used is the specification that the Gougeons have in their book for a situation where a shelf is epoxied to a wall by it's edge alone.  That situation almost never comes up in boatbuilding.  The parts are almost always mutually re-enforcing, and the fillets used would in most cases be about half the size specified.

So what do you say.  In theory they could be a lot less structured, but then is one building a Wharram or something else.

So let's say you hit a container.  In that failure mode you can have a huge load go right down a shear or chine clamp, and cause failure along the glue joint.  It's just some rotary veneer stuff, in Asian pine.  You get a huge zipper.  Think in that shear failure mode a lot of marine hardware spreading the load out of the glueline might have helped?  But hey, some guy in an online forum broke a sample over his knees in a totally different sample loading, and said you were good to go...

Would I prefer it if some of these joints weren't designed to rely on hardware, probably.  But the pattern was set in the post 76 world when I was 17.  I don't think it has been significantly rethought since then.  There are advantages to building this way, as others have said.  The fastest way to build is where you can always add pieces and don't loose buckets of time staging things for the next day.

Permalink Reply by Blanc Jean-Paul on May 27, 2015 at 10:37pm
Hy
y build a small catamaran inspired of tiki 21. view it in my blog. (archiprog.blogspot.com) it i it is entirely glued with epoxy without any nails or other. Hulls have 4mm plywood and fiberglass 160gr . Lisses 40 x 20 all 20cm
i'm so happy of the result than y finish in the same system a 46' not size of course.
infortunately y tested the first hull, and the result is good very good. if a breack happen this is not structural but only in hull plywood.

I pulled all the feasters out of my 24 foot tri, that isn't really the point is it.  That is how it was designed.  Just changing a single dimension in the shear clamp would invalidate that approach.  On the other hand I just glued the shears on my immaculately built canoe from around 1980, and after about 20 years the shear started falling off.  I just reglued it with a couple of fasteners.  Now it will outlast me.  That boat was stored indoors 98% of the time, and so nothing bad happened.

Boats are designed to multiples of their max loads.  The boat is not supposed to fall apart, that doesn't mean it is structurally strong.  Aircraft are designed at something like 5 times max loading for the wings.  They could cross the Atlantic hundreds of times, and never show a problem, doesn't mean anything.  In and emergency one steeply banked turn could rip the wings off if they didn't conform to standard factors.  The plans are expensive enough why not ask the designers what they intended.

Permalink Reply by Blanc Jean-Paul on May 28, 2015 at 3:08pm
Yes y use clamps weight strap and when it's impossible screws Who's temoved after. In my first build,all is glued whithout any screw. Just some pieces are fixed by bronze screw, and only external. And for my new boat y work with the same system.

The use of nails allows for continuous lamination - one layer over the next as the epoxy is curing. They are also used over long glue ups where the number of clamps to be used would be costly. You can see this in Classic designs, as well as in larger Tiki beam construction.

The use of screws are to provide temporary clamping pressures until the glue dries, then are removed and the holes filled. There is simply no way you can sheath the vertical side of a hull using clamps or weights. You screw the ply to the stringers then remove and fill once the epoxy has cured.

In the following picture, we laminated three layers of 5/4 lumber on the top and bottom of this 24' long beam in one day. We nailed on the first and second layers, then screwed on the third layer. The screws were later removed and the holes filled. In the photo, only the first layer has been installed, and we are coating to install the second layer on one side. Had we decided to use clamps instead of nails, we would have used every single clamp in the shop, and work would have stopped completely. What took a single day with nails and screws, would have taken six days with clamps. 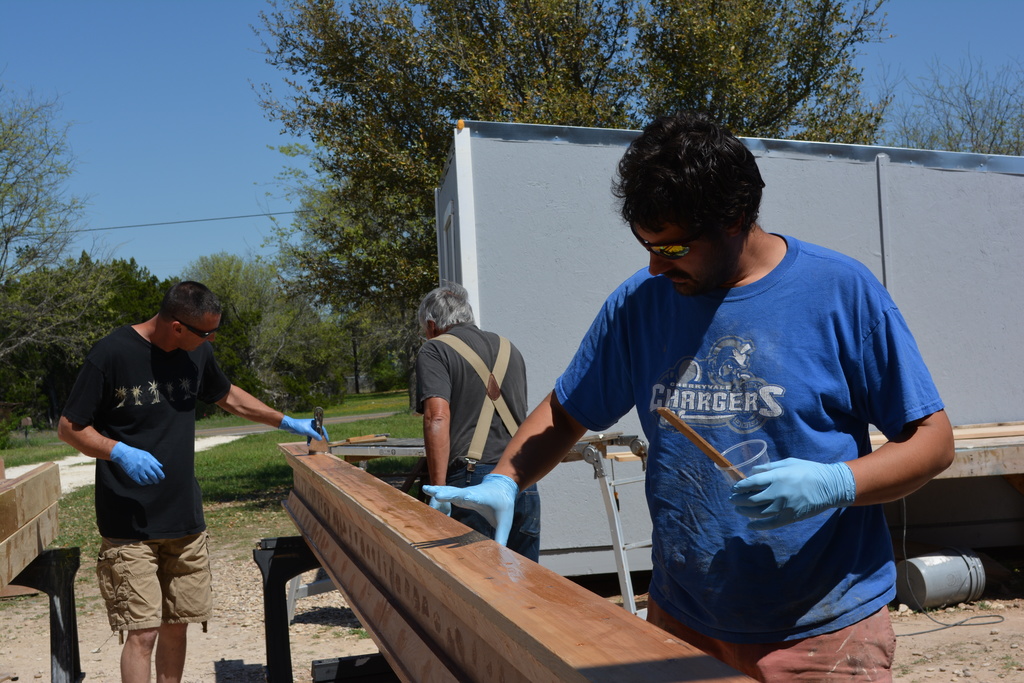