How to capsize a Hinemoa

Start with a mistake

then when you get bored, make another mistake.

Shortly after sunset on 21/11/2018, while on starboard tack from Middle Percy Island, QLD to Sarina, the hatch cover on my Starboard foredeck came free. This allowed my Stb hull to fill with water. Once the hull was awash, the vessel jibed and capsized. 12hrs later I placed a mayday call, and activated my Epirb. An RACQ helicopter arrived and had me onshore within an hour.

In not as brief:

winds were 15-20knots North, predicted to build and back to NW by the next day. Seas were about a meter, and short and steep. It was about halfway up on a 5.4m tide, flooding South. I was sailing my 23ft Hinemoa named Isis with a single reef in the Tiki21 rigged mainsail. The wind vane was steering. I was catnapping in the port hull as I was mildly seasick. I was wearing a wetsuit and full length jacket, standard for me sailing at night. I left middle Percy at 1100

I came on on deck when I heard/felt Isis slow down. the stbd hull was awash with the hatch covers (fore, aft and companionway board) adrift, with things starting to float out of the cabin. At this point capsize was not in my mind, I was concerned about my stuff floating away. As the windward hull was awash, I thought the main would help to keep the boat upright. I was shortly to be proven wrong. As I  went forward to try and secure the forward hatch, Isis began to jibe.  Immediately I dropped the hatch and started to free the halyards. The main jibed and Isis rolled. I was thrown/kind of jumped and was brought up short by my safety harness. Fortunately the tether was long enough that I was able to surface and disconnect my self. Then came a blur of swimming after floating water jugs and dinghy and tying them to Isis. After the initial flurry of trying to save things, I rested on the upturned Port hull. It was quite high out of the water as it had an air pocket inside. The waves were slamming me off the hull and back in the water every few minutes, so I decided to try to assemble my dinghy so I would have somewhere to sit out the night. My dinghy was an outrigger canoe, and I managed to lose the outrigger in the fiasco. Using empty water jugs and a length of bamboo a makeshift outrigger was cobbled together. I then tied the dinghy off on its seven fathom anchor line, climbed in and waited for sunup. Now I had a bit of an opportunity to sit and think, “wow what a beautiful night”. It was a night shy of the full moon and there was a rather chaotic array of clouds.

Throughout the night I intermittently bailed the dinghy, re-lashed the makeshift outrigger, plugged holes in the canoe by wedging myself in the bottom, vomited, and watched stuff drift away. I didn’t much care at that point as cold, fatigue, and dehydration were hitting me.

By sunup, I had the grand scheme of releasing my mast and re-stepping it on the capsized deck. This would then allow me to hoist some sail and force her to re-capsize. In theory this may have worked. Flat seas, mask, fins, a knife,well rested, yes it could happen. As it was all I managed was to tire myself even more, and consume copious quantities of seawater.

At this point I decide my options were to:

1) wait and hope a passing yacht saw me

2)swim inside and retrieve my waterproof VHF and EPIRB, and call for help

3)attempt to paddle the dinghy to the nearest island downwind

as my water jugs had ended up contaminated or broken free I was without water (other than a liter of homebrew) so option one was discarded, and three was put on the back burner. This left me option two, I just had to hope I could get to the box in which the VHF and EPIRB were kept.

back into the water I went, and swam down into the port hull. The large air pocket in the cabin allowed me to breathe while I grabbed the box, then struggled to get it out. It’s damn difficult to force a waterproof box with a volume of about fifteen liters underwater, I don’t recommend it. Afterwards I sat and held my VHF for about half an hour before I was able to bring myself to call mayday. It was one of the hardest things I have ever done, to admit I failed myself and my boat. My mayday call was received and I was instructed to activate my Epirb and await a helicopter. I then dove back inside to see what I could salvage. I managed to grab a bag, my bosuns chair, a shirt, and three liters of honey.  Why the honey?? It is damn good honey and beyond that I don’t know.

I then sat on the upturned hull and waited. Faster then I expected, the RACQ helicopter was there, circling me twice, then approaching from downwind, with a diver dangling below. Upon entering the water he stuck me in a harness and whoosh, up into the sky we went. It was a damn fun ride. And the view from the chopper was amazing, except for seeing my home of the last three years leaving my life.

Elapsed time from Epirb activation to being on the ground and in a hot shower was about an hour.

So that’s about it.

Now for the mistakes.

I continued on through the night for no good reason, to get somewhere I didn’t need to go. I had even anchored an hour before sunset to make dinner, then carried on.

i was queasy, and so not the most attentive to my boat. I am quite certain in the time it took to fill the hull, I could have averted disaster,rather than getting on deck once it was mostly full.

‘The forward bulkhead has an inspection port to allow ventilation between the cabin and forward locker. I did not close the port before going to sea.

the lashing line holding the forward hatch down had been recently replaced with a new length that was quite stiff and slippery. Only inspected it closely shortly after getting under way

my first action on coming on deck was to grab stuff rather than drop the mainsail. Without the main forcing her to capsize, I could have dealt with a flooded hull.

My Lazarete hatches had no tie downs so all of that gear fell out immediately, along with the cabin contents as the sliding cabin tops were a bit skewiff. Rather than modifying the cabintops, I had been sailing the last two months with all the supplies.

my water jugs were not lashed to the deck to begin with, I usually fill the dinghy with them.

As for making salvage easier, I should have anchored post capsize. The water is less than 20meters deep in that area, and I had a 20kg anchor set up with 100meters of 12mm nylon and 10meters of 8mm chain.

Good Levy, good story, teaches us not to make the same mistakes. And you will have history to tell your grandchildren .... hahaha. Welcome back.

Hi Levy, thank you for sharing it so we can learn and be better prepared. I hope you can recover Isis and sail it again.

Thank you for your experience. I hope it will never happen.

Does anybody of you knows others experiences of captzice with wharram cat?

In the Sea People magazine are references about the capsize of a Tiki 21 and a Pahi 26 (twice), both in a lake in Austria. In T. F. Jones book Multihull Voyaging there is a report of a Tane capsize in a similar situation as the Hinemoa Isis. I remember a report in an old forum about a Tangaroa capsize (Hanneke says that it was with full sails in F8 winds!). One (or two?) of the capsizes of the P26 was with the hulls empty in a race. Perhaps there was another T21, but I am not sure.

I think they are very few, and this si not something to worry about. For instance, Glenn Tienman in a P26 sailed from America to Asia, another P26 has sailed from South Africa to the Caribbean, many Tikis 26 across the Atlantic, Rory with the T21 in a round the world, etc.

I am not worryed about my tiki26's security. Where I use to sail (Croatia) we have strong wind but usualy not high waves.

I have sailed my tiki till 15 knot max speed without any problem, but you kwow....shit happens

Two weeks adrift and all that's left are the hulls.

It is a nice boat, even in this condition. The hulls looks solid, perhaps you could rebuild her with more beam in a Tiki style, including the modifications you want after the recent experience.

Structurally she is still sound. It's mostly cabins and bulwarks that need rebuilding. A great project for someone, just not me.  She's yours if you want her.

Located in carmila qld. There is even a boat ramp 500m away.

I lack the the funds and time. 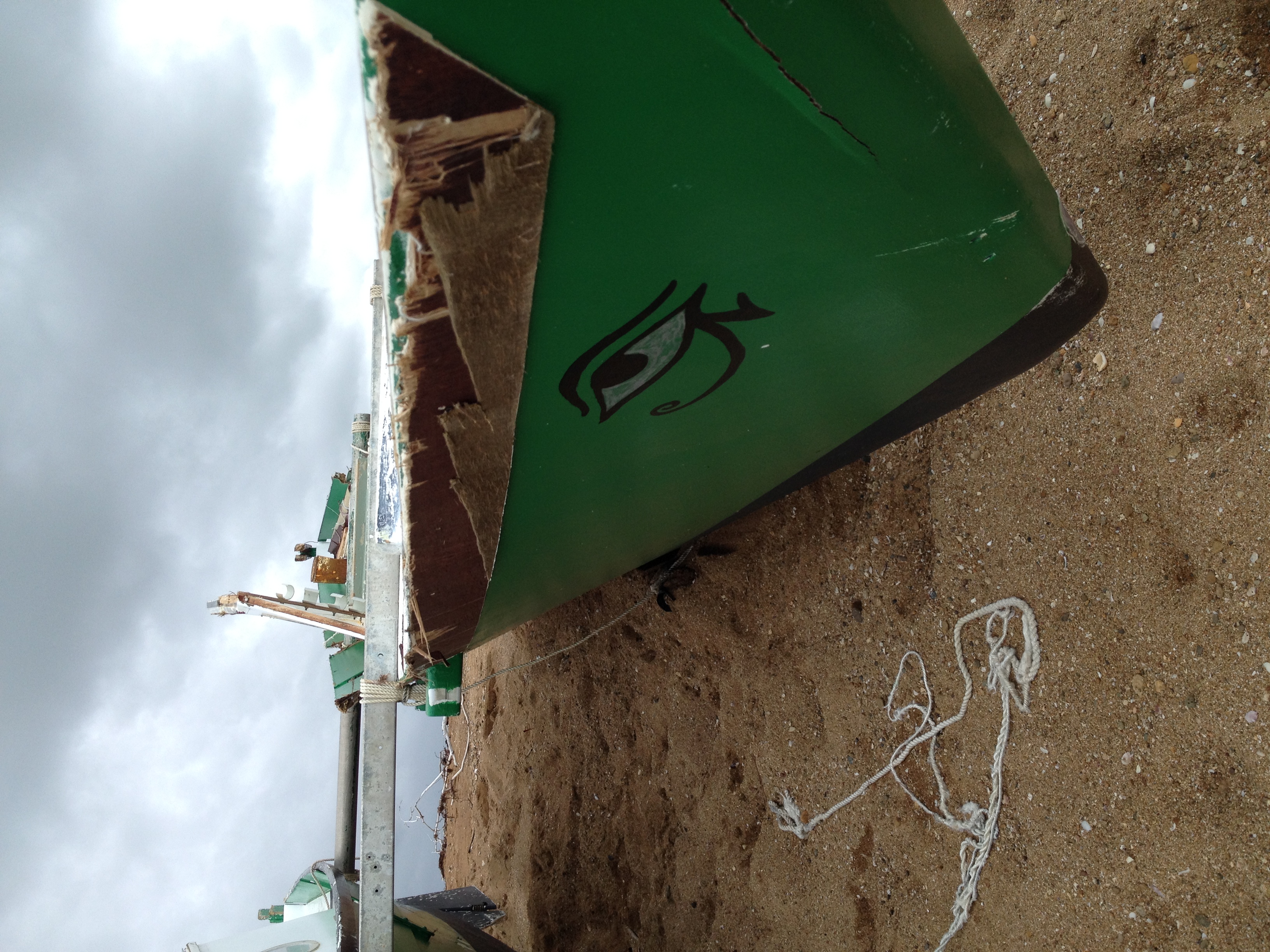