Having changed my status from "Builder" to "Owner" just recently I want to seize the occassion to introduce myself and my new Hitia 17 "Dedari Nyuh Kuning" :-) 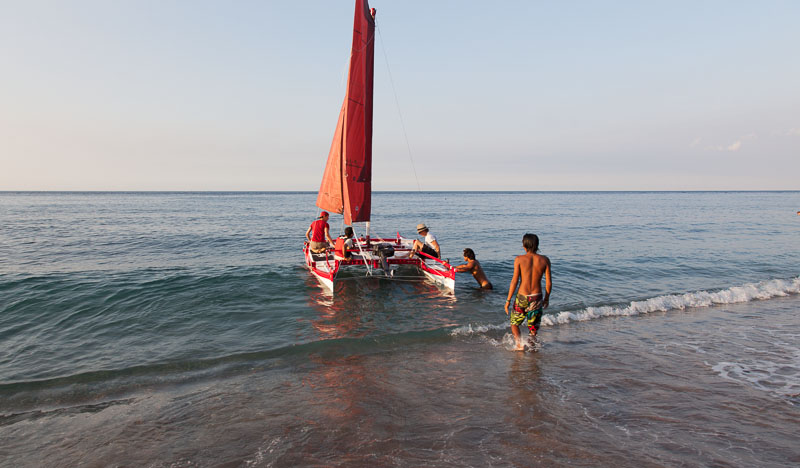 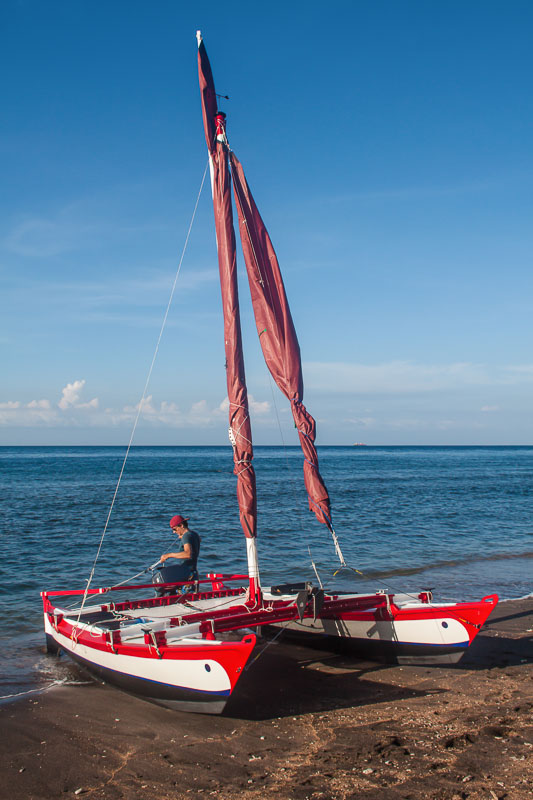 The boat on a beach in East Bali

The boat was built in a small village on the island of Bali, Indonesia. It took us more than 1500h to finish the boat. Most of the building time was done by a Balinese carpenter who had no previous experience with boat building, epoxy or fiberglass and worked at Balinese speed which explains a lot of the hours. Additionally we tried to build to a pretty high standard (me being Swiss) despite the lack of sophisticated materials in Indonesia, that amounts for another big part of the extensive building time. The hulls shortly before glassing

Few details about the build:

Biggest problem: I wanted to have a strong-ish engine which can cope with the tricky waters in the Lombok Strait and decided to fit a 5HP engine centrally on the aft beam. This had many implications, we mainly had to enforce the aft beam to avoid it from twisting and needed to redesign the beam sockets in order to avoid the beam from completely turning “no-matter-what”. The engine was also in the way of the tiller so that needed to be addressed, too. But it finally worked out well and I am very happy with this setup. 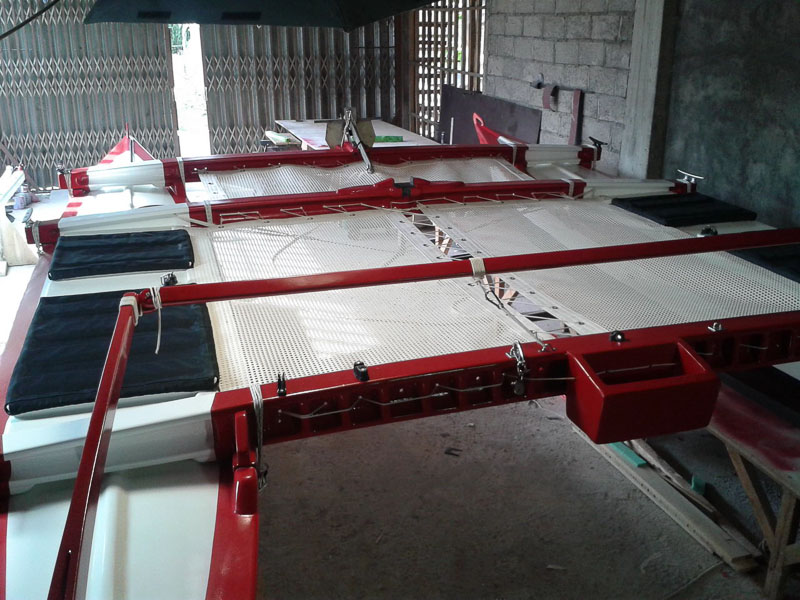 And yes, I would do it again. We could have built a much cheaper boat in much shorter time but the outcome would have been less satisfying. I think the relatively high costs are more than justified by the result. Will I build a bigger one? Maybe… After a whole year of building I need a break. Also I developed some sort of allergy towards the end, not sure if it was the epoxy or dust from the PU paints though.

Finally, I let some pictures speak :-) 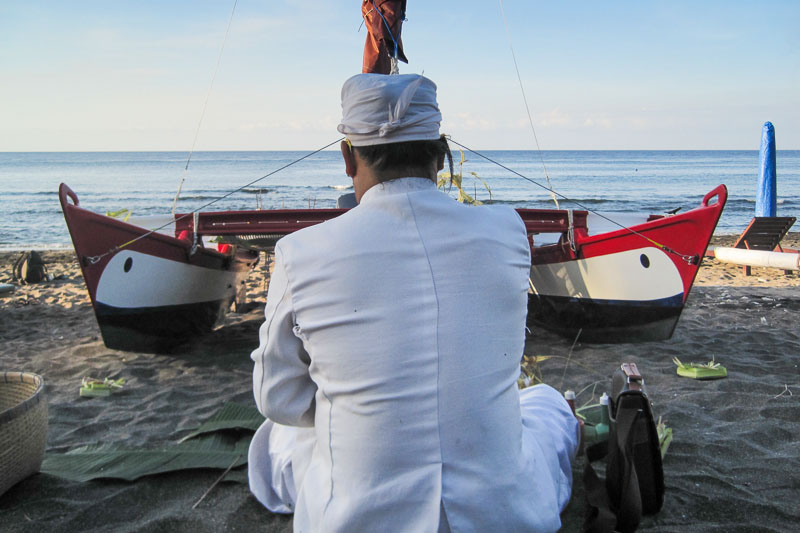 A priest is giving the boat a traditional Balinese blessing, a ritual usually performed for local boats 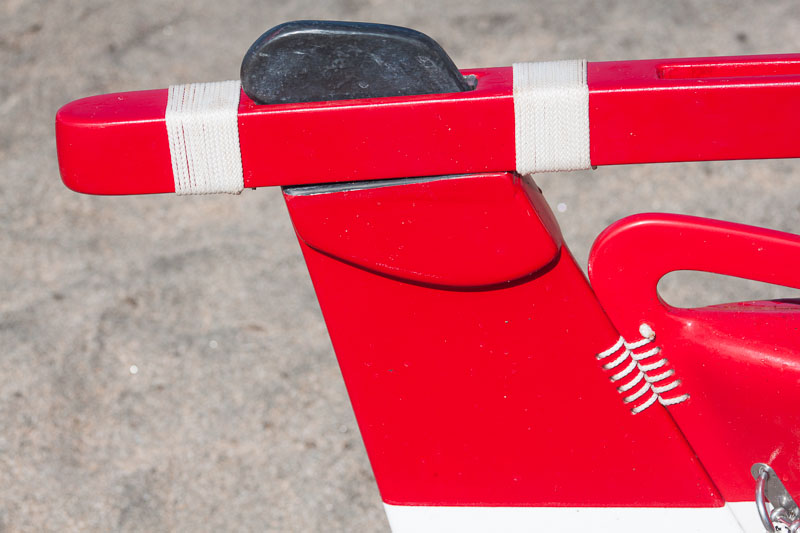 Detail view of the rudder and tiller 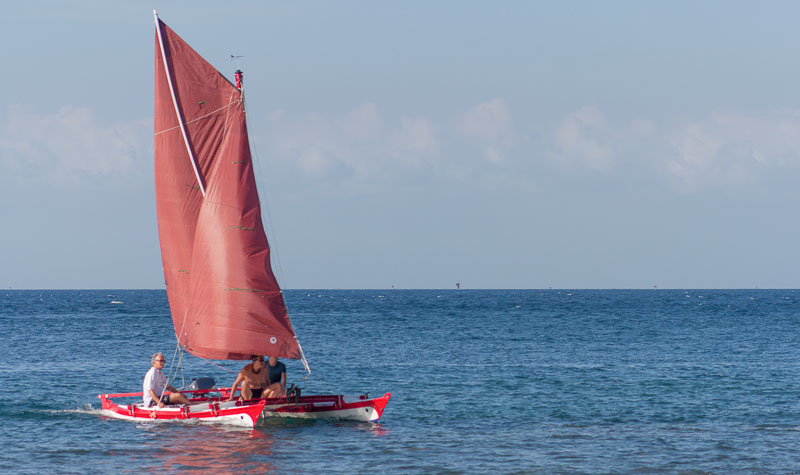 Coming home from a trip around Amed, East Bali

I’ve set up a Flickr  page with many pictures and some comments from the build and launch here:

Mate may I be the first to congratulate you on a fine cat, she is lovely and looks superbly finished. Please keep us informed of your adventures.

all the very best

Congratulations! She looks excellent! I hope, I can follow this summer.

Thanks everyone! And to Martin & Michael: Best of luck with your build!

Two more pics from this weeks trip to East Bali: The crew, Pierre and the pretty lady in front Looking at the island of Lombok, the mountain is Gung Rinjani, Indonesia's second highest volcano. That boat is a traditional Balinese trimaran fishing boat

I'm just starting to build hitia 17 in Jakarta, Indonesia.
I need to check with you regarding epoxy and plywood, if you don't mind.
Cheers

Hi Martin, sure, send me a PM

Awesome, thanks so much!
just sent you a PM, apparently we have to be connected as friends first before sending PM's hahaha

Hi Martin, sure, send me a PM