Checked out of Thailand today, ready to leave early Sunday for Terengganu, Malaysia.
Harbour Master wanted 1000Bhat, no receipt. When pushed it was for an "engineer", naturally no engineer had seen us so he didn't get his 1000Bhat. Customs was sweet and so was Immigration, although took a while as the final signature was on condition that he showed me his house plans on the computer :-)

Took Kate from Amandla II for some fruit at the Market across the bay from Boh Phut, actually two bays across. Dominique's reaction on Kates return was worth the trip, as Kate had taken pity on the turtles and eels for sale at the market (for food) and had bought the entire stock. So tonight they are baby sitting 14 turtles of various sizes and a bucketful of eels. Tomorrow morning the kids are off to set them free in a local river. No doubt to be caught again and back at the market.

Was a nice surprise to see Amandla II. Was not expecting to see them till we arrive in Phuket in November. We have enjoyed their company since we first met them in Redang Island in Malaysia and again in An Thong, Koh Tao and Samui.

We were going to go with them up to Vietnam and across to the Philippines but met David (another Wharram fan) and Joy of Night Owl II who had just been arrested by the Vietnam Coast Guard sailing past Vietnam and was "released" on payment of two thousand US dollars. We had heard it was difficult and after this will wait a few more years on the hope that it opens up a bit more for private sail boats.
TiBen, crew on Board Amandla II, is a Wharram Evangelist, one of many we have met. He is sailing back to his home in Mauritius on his Tiki 26 that he bought in Phuket around December/January, TiBen has been a great source of knowledge as he has been delivering cats from South Africa all over the world. And is a fantastic source of knowledge from fishing to sail trimming.
Amandla II in An Thong 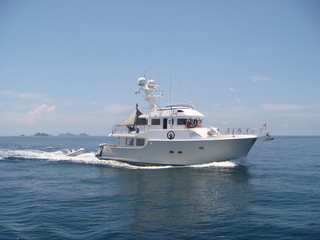 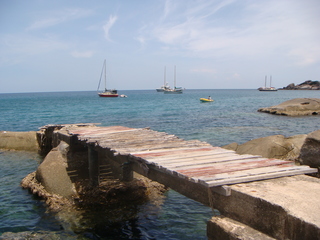 Comment by paul anderson on June 6, 2011 at 12:41pm
mate you are living the dream,i shall keep sanding and ah just dream;)