I know it says in the design book that the Tiki 30 is the largest trailerable Tiki, but does anyone actually do this?

It looks like a huge effort to dismantle and move around, not to mention the size of the trailer needed.

I would love to hear from anyone who has experience in doing so and if it is truly feasible. 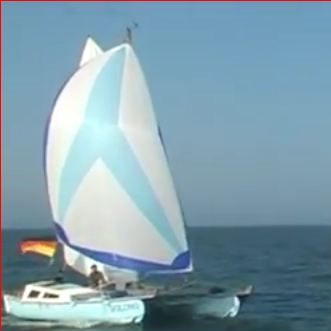 i trailerd my tiki 30 severel times over long distances, it works. but, the tiki 30 is not a trailer-cat that you can assemble in a few minutes for a day of of sailing. that will not work. it needs me a hole day to assemble the cat or disassemble it. and i need the support of a forklift or a crane to do it. even the beams are so heavy, that you can't handle them alone. most difficuilt is, to rigg the mast. the load of it is nearly behind the aft beam, if its foot is on the mastbeam. so try and lift it ;)

I know this is an old thread but since my experience is somewhat different than SoLong I thought I'd chime in.

I helped this past summer(6/13) in the assembly of a Tiki 30 in the water from a trailer. The boat is moved on an modified house boat trailer towed with an ancient pickup truck. It took about 4 to 5 hours from the time the trailer hit the water. There were three men, two older in not in great shape and myself, older but in better shape:) I'd say two men in good shape can launch. The heaviest piece by far was the wood mast! Next heaviest are the beams. A small trolly make moving the mast and beams to the dock much easier. The standard cockpit isn't terribly heavy but awkward. The mast was raised using a gin pole pretty simply.

There are many little tricks to speed and ease assembly, i.e. we took an inordinate amount of time separating the hulls and getting them in position to receive the beams. Just improving this step would have saved a half hour to 45 minutes!

My guess would be a "standard" Tiki 30 could be assembled by two healthy experienced men in 3-4hrs. She would then be ready to leave the dock for anchor/mooring. Probably the optimum number would be 4 men. More and they probably just get in the way:) But with the correct simple machines, pole, pulleys, trollies,levers it can be done solo in probably 5hrs.

I'd say you need to build with in mind how you plan to move, assemble and launch the Tiki.

So how are you doing Josh, did you start a tiki 30?