On a quest for more adventure this year, my wife Libby and I, decided to sail our Wharram Tiki 21 “Sandy” to the Wharram gathering at Islamorada, Florida. Our 320 mile round trip started in Jupiter, Florida.
The plan was to sail in company with Gene Perry and Dale Kipp. Gene has been sailing and building Wharram catamarans for many years, and I hoped to gather any wisdom about these boats that he could share. Gene had recently acquired a classic 27 foot Piver trimaran, “Misty 3”, which he planned on sailing for our journey. 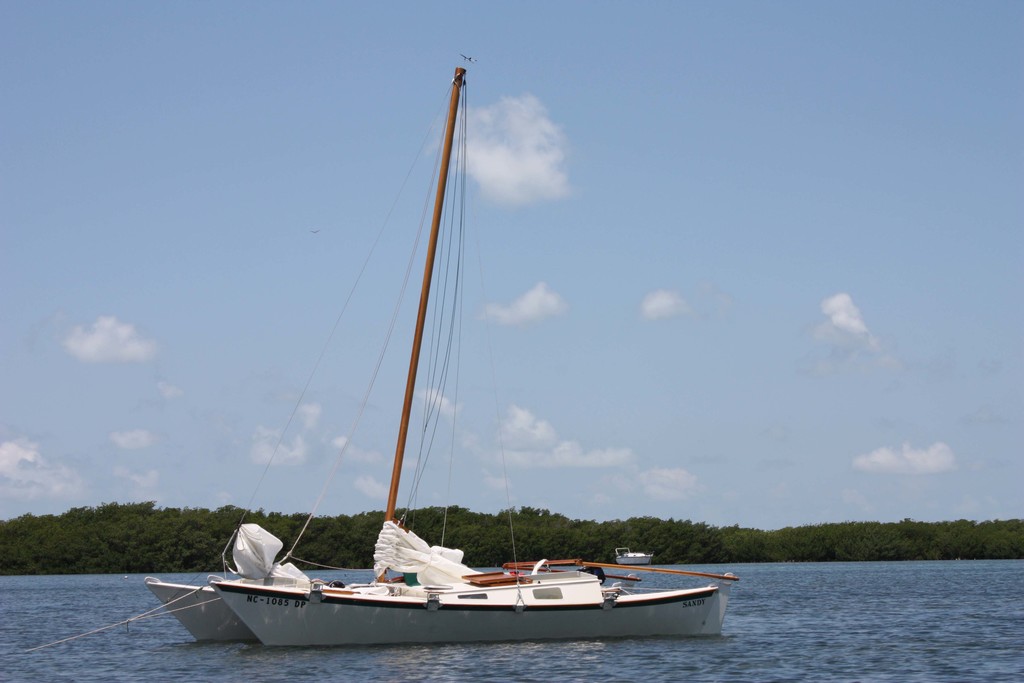 On Monday, May 16, after enjoying a space shuttle launch, we met Gene and Dale at the Jupiter Inlet with a west wind developing. It was a relief to start sailing toward Palm Beach after so many days of preparation. After sailing for several hours, and knowing that the drawbridge operator at Boca Raton anchorage would go home at 6 PM, we entered Lake Worth Inlet and planned on sailing to the south end of Lake Worth.

However, while sailing through the inlet, Gene’s mast on the “Misty 3”snapped at the spreaders. Fortunately, no one was injured, and we quickly secured the rigging. After a brief discussion, Gene and Dale decided to continue on the journey, knowing that the rest of the trip would be under motor, and not under sail. Therefore, we had to adjust our sailing plans and since the Gulf Stream was close to the beach with southwest headwinds, we opted to motor down to Miami. Traveling down the Intercoastal waterway was quite a cultural clash between my small Polynesian style catamaran and the 120 foot yachts, which were equipped with their own onboard helicopters.

Around noon on Wednesday, we exited Miami at Government Cut and sailed past Cape Florida and Stiltsville. As we entered Biscayne Bay, the wind veered westerly making for a beam reach to the anchorage at Elliot Key. Arriving about the same time as Gene and Dale in their motor coach. Later that evening, in fading light, we saw David Crawford, heading south on board the Tiki 30, “Abaco”.
Libby and I awoke to a steady F4 Northwest breeze on Thursday morning. Breakfast consisted of grits and onions, peppers and bacon bits. Soon after, it was anchors away and we went flying down through Biscayne Bay under spinnaker and mainsail. 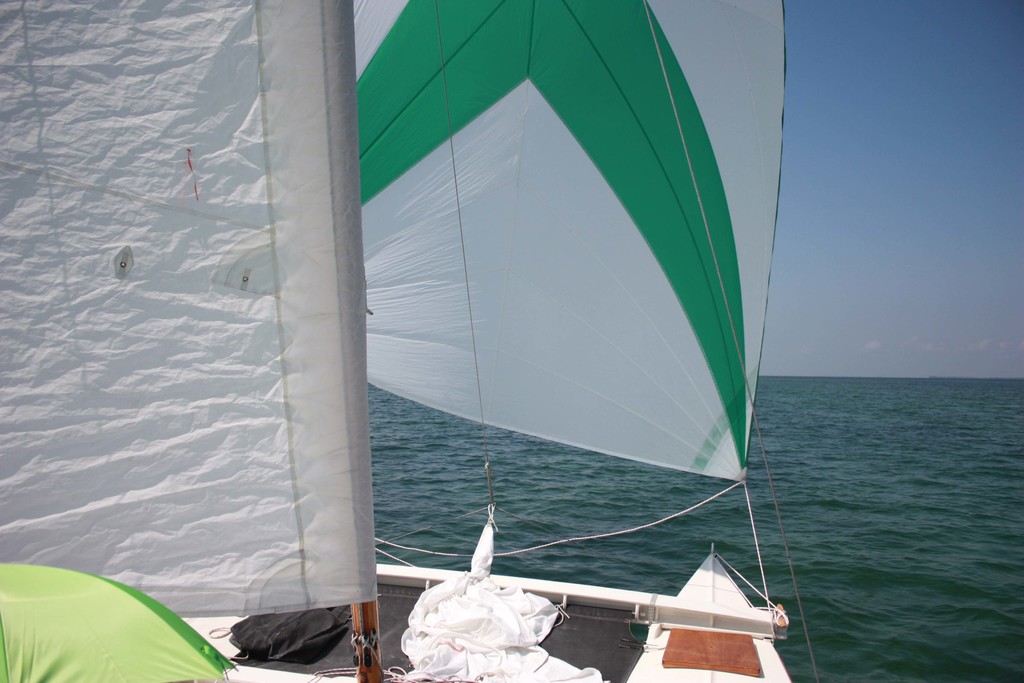 The northwest winds slowly diminished in Barnes Sound, so with “Misty 3” catching up, we stopped for a nice lunch of grilled fish sandwiches at Gilbert’s on Jewfish Creek. It was quite a relief to stretch our legs on land after four days on the boat. Later that afternoon, easterly winds developed as we snaked our way through the sounds and creeks near Key Largo and Plantation Key. Once we had maneuvered our way out into the open, we eventually stopped for the night at the Cowpens anchorage.

Friday morning we completed our southern journey with a short sail, skimming the flats at Windley then at Upper Matecumbe Key. The excitement built upon arriving at the Lorelei Restaurant on Friday morning for the start of the Wharram Rendezvous. 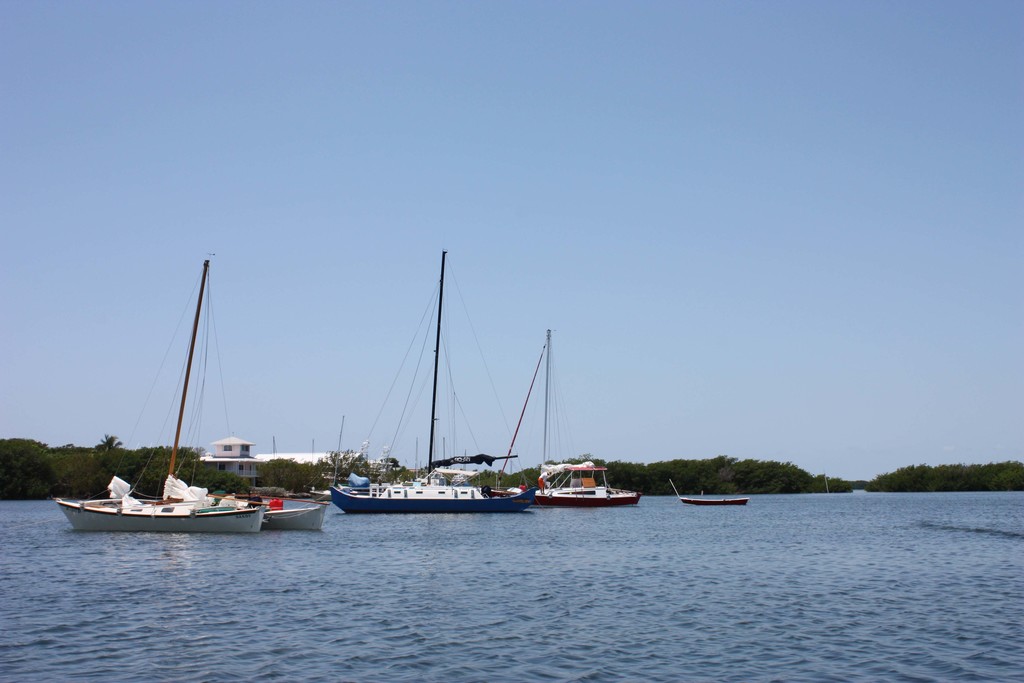 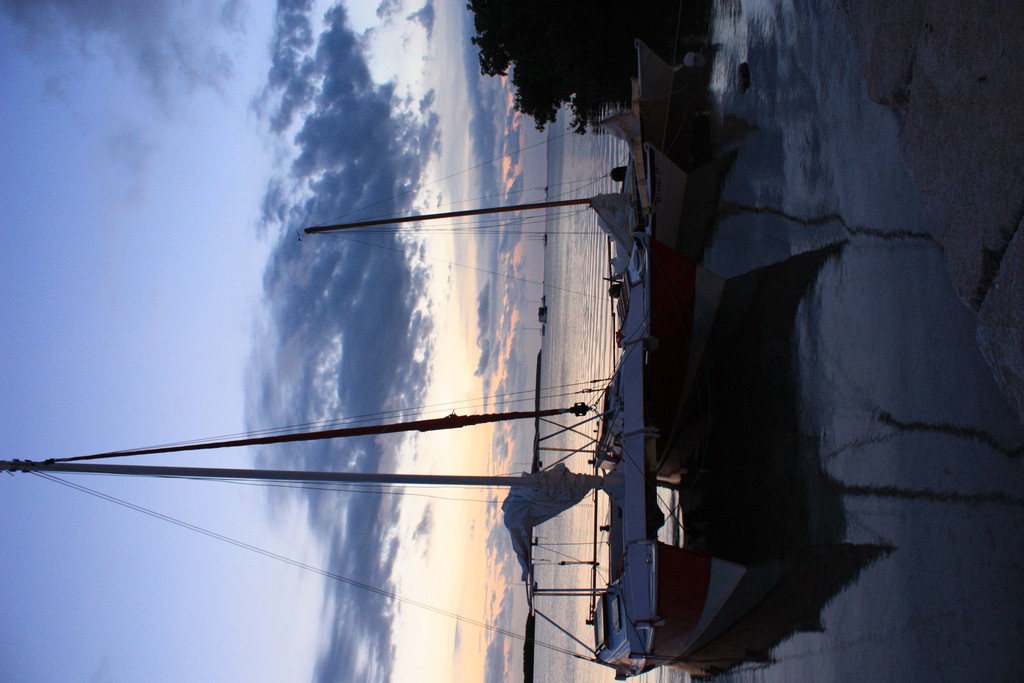 It was a pleasant weekend with sharing ideas and adventures about our Wharram catamarans. I, myself had made several upgrades to “Sandy” since last year, including installing front hatches to act a wind scoops; constructing cockpit covers for ventilation and rain protection; and sewing a new spinnaker. And Saturday evening, we had a beautiful, group dinner under the palm trees at sun set, made perfect with the outline of boats anchored just off the beach. Dan Kunz, our host, organized yet another successful rendezvous for our spring 2011 get together.
Monday, May 23, my wife Libby, left to fly back home, which left me to single handedly sail “Sandy” the 160 miles back to Jupiter. With Gene and Dale motoring into the east winds on the Piver trimaran, I sailed “Sandy” up the Keys making good progress. One highlight of the day came when sailing through Buttonwood Sound. I looked back and saw two porpoises swimming between the rudders of my boat, only 6 feet away from me. For the evening, Gene, Dale and I anchored for the night behind Pumpkin Key, a well kept private island in Card Sound. It was altogether a good day’s run.
The next morning arrived with a short sail up Biscayne Bay to anchor for the night near the old marine stadium near Miami. This is where I split off from Gene and Dale, who continued on motoring up the Intercoastal waterway.
The following morning, Wednesday, I sailed out of Government Cut at 7 AM for the 70 mile trip to Lake Worth Inlet at Palm Beach. After experiencing light easterly winds in the morning, the winds increased and I was averaging 10-11 knots boat speed for awhile. I arrived at Lake Worth Inlet in 9 hours. All in all, a good day.
Thursday morning dawned to another beautiful day for the last 12 miles to Jupiter Inlet. The sail was uneventful with a 12 knot southeasterly until I reached the Jupiter jetties. I underestimated the outgoing tide and upon entering the jetties under sail. The boat stopped making forward progress, so I sat surfing the swells. A panic soon arose within me while trying to steer and lower the outboard motor. During all of the excitement, I looked up on the jetty and not more than 30 feet away from me, sat two fishermen who were smiling and enjoying the chaos. But finally, the outboard kicked into action, allowing me to motor into calmer waters.
Later that afternoon I loaded the boat for the long trip back to North Carolina. It was a two week adventure that I will never forget.

Comment by Brandon Gamble on June 7, 2011 at 11:51pm
Sounds like it was awesome man! Sorry I wasn't able to finish in time to make it down. The pics look great.

I haven't posted any pictures yet. My trip home took 6 day and not going ashore. One jump was 40 hours from Punta Gorda to Appolacheecola. The whole 2 month trip was good to the Bahamas and the Dry Tortugas and the Wharram gathering was  great. 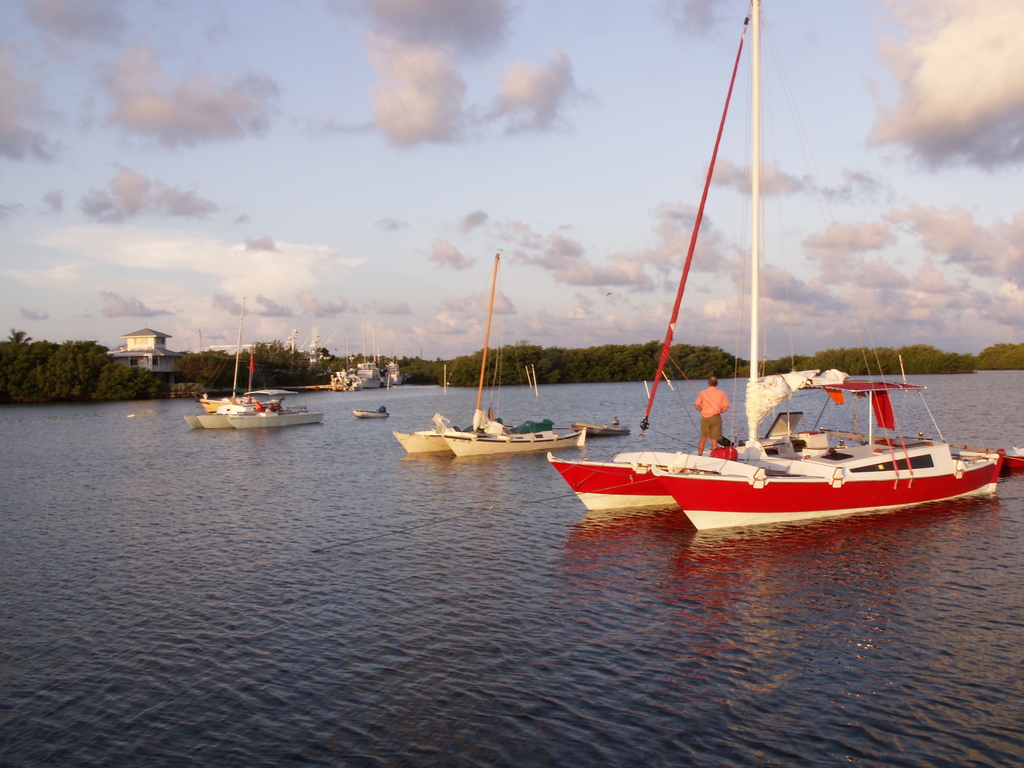