Hi, I'm Sean.  I'm new to this forum.  I'm currently re-starting work on my Tiki 30 which has sat gathering dust in a barn for about 7 years while I finished paying off the mortgage and saving for my kids schooling.

I'd like to post about that project when I get something good looking to take photos of, but it's a few miles away on my family's farm, and I am making trips over to work on it as time allows.  In my own basement I am working on the dinghy, and I have some decent progress made on it.

I found this boat laying on the side of the road with a big cardboard "FREE!" sign stuck on it.   It has mast, spars, daggerboard, rudder and tiller all there and in good shape.

But no wonder it was free.  Someone had been careful building it, but for years it's apparently been laying belly-up in the mud, soaking up rot.  It's not pretty, but most of the rot is along the gunwales and upper transom, and was easily cut away.  The bottom is solid and dry. I cut all this away and made a couple of wide scarfed patches to put in the place.  The transom out of whiteboard lumber and the sides out of marine ply I had as scrap from the Wharram in the barn. 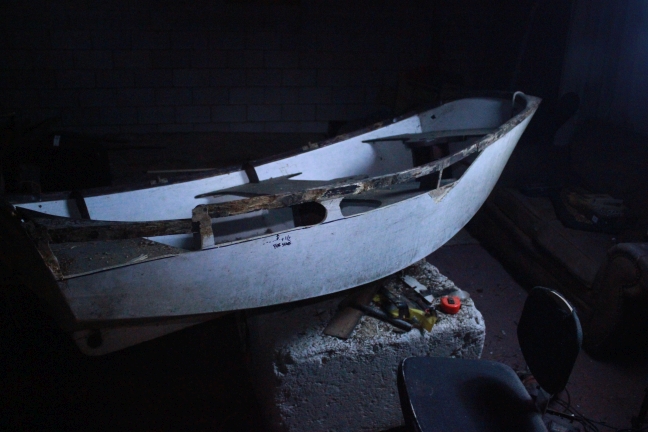 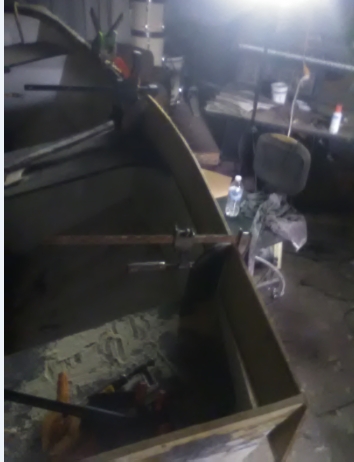 Now I've scarfed in the patches and gluing up,  There are one or two other spots on the boat which need similar treatment, but this was the major damage.repair.  The big foam block is like a sawhorse, so I can move the boat  and rotate it.  The dark stuff is this ground up cotton flocking (milled denim I guess, as it's dark blue) that's mixed in the epoxy for a glue, the remainder of which was in the pot I spread around as fairing/filler to keep from wasting it. 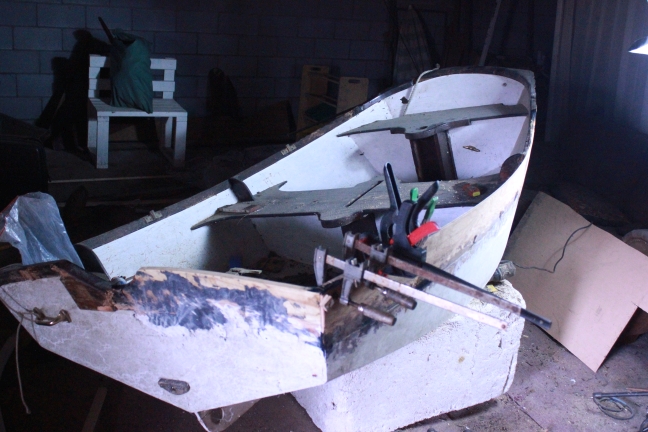 Does anyone know what this boat even is? Some variant of an opti?  It's obviously hand-made, mostly from plywood, with some lumber.  It's 8' with a 4' beam, had TWO sets of oarlocks (if that's what they are, a bit small, perhaps they were for a canopy?), in addition to a short mast and one other diy spar (no sails were on the roadside.)  I'm hoping to have it done over the winter.  (The Tiki 30 probably has 2 more years of build at the rate I go.)